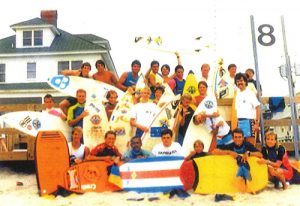 B.B. Bombers opened in 1980 and quickly became one of Ocean City’s most popular surf shops. Boards, T-shirts, wetsuits and clothing, such as shorts and swimsuits, were sold at the small store on 8th Street.B.B. Bombers (a “bomb” is surfing slang for a big wave) is best remembered for the surf camps it sponsored from 1985… Read more » 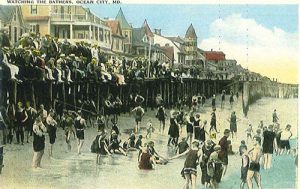 Postmarked Aug. 2, 1927, this postcard illustrates how much Ocean City has changed in 90 years.The Boardwalk was raised far above the beach in those days and on hot days bathers would seek shade under it. Some would plan a picnic lunch under the Boardwalk with the smell of creosote, damp wood and wet sand… Read more »

Ocean City’s motel industry developed in the mid-1950s following the opening of the Chesapeake Bay Bridge and the desire of young families for lodging that was casual, inexpensive and that offered easy on-site parking. Within a decade, the vacant land between 15th and 33rd streets became known as “Motel Row.”Motel Row grew from a few initial motels… Read more » 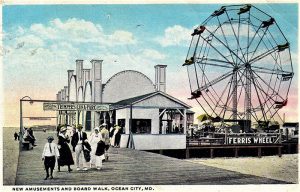 Ocean City shared in the growth and prosperity that the 1920s brought to the country and the hotels and boarding houses stayed full for most of the summer season.There were no bars or nightclubs during that decade as Prohibition had made the sale of alcoholic beverages illegal but there was still adventure on the Boardwalk… Read more » 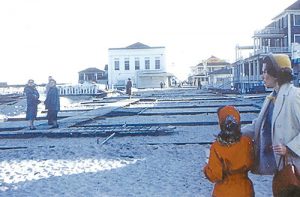 Eight blocks of Boardwalk from North Division to 1st streets were rebuilt in concrete and widened by 10 feet between January and April in 1955.The Mayor and Council had decided to replace the wood with concrete due to maintenance costs. The George Bert Cropper Company did the work for $43,819 and used some of the… Read more » 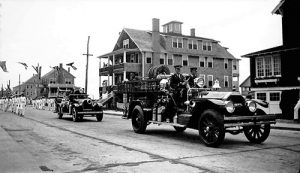 The Maryland State Fireman’s Convention has been a signature event for over 70 years in Ocean City. For several decades, it was the largest held all summer and ushered in the true beginning of the summer season.Prior to 1970, meetings and exhibits took place at the former high school/elementary school (today’s City Hall) at 3rd Street… Read more » 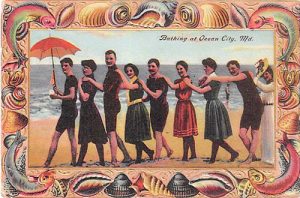 The Town of Ocean City was incorporated by the Maryland General Assembly on April 12, 1880. It included the land between N. Division Street and S. Division Street plus property on the south side including the vicinity of today’s Inlet. The Inlet did not exist at this time; it would be created during a storm… Read more » 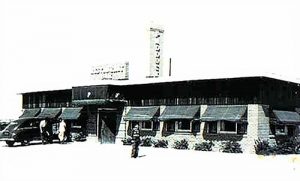 The Paddock was built by Gabby Mancini on 18th Street and Philadelphia Avenue in what was then considered “way up the beach.” It opened in 1953 as a bar and restaurant specializing in live entertainment. The interior was knotty pine and had a mural painted over the bar featuring horse racing.The original building, pictured, was partially… Read more »

This postcard image (circa 1909) shows an Ocean City in the time before paved streets and traffic jams. Photographed from the old water tower on Somerset Street the view looks east across Baltimore Avenue toward the ocean.The tall brick chimney in the foreground was part of the town’s electric power plant while the original Atlantic… Read more » 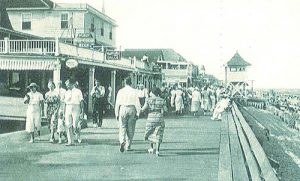 Ocean City’s beach and Boardwalk had a different appearance in the years prior to World War II. This photo looks north from Talbot Street. The Boardwalk in those days was narrow and raised about four feet above the beach. On a hot day, bathers would sit under it in the shade and enjoy a picnic… Read more »