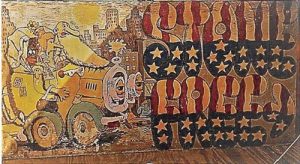 Stone Free was located on Caroline Street behind the former Maryland Inn just off the Boardwalk. It was a popular shop that catered to the so-called “hippie” crowd of the early 1970s as well as younger teens fascinated with the psychedelic culture of that era.Remembered for the tunnel where dozens of black light posters were… Read more »

This week’s Vanishing Ocean City column is sponsored by Ørsted, the world leader in clean energy. Learn more at orsted.com/md-deOcean City looked much different in this aerial photo taken in 1946 between 14thand 15th streets.The large building in the center was the original Commander Hotel before its second wing was added and the vacant space to… Read more » 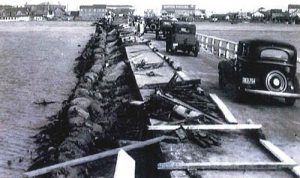 This week’s Vanishing Ocean City column is sponsored by Ørsted, the world leader in clean energy. Learn more at orsted.com/md-deThe first bridge to carry automobile traffic into Ocean City was approved by the Maryland General Assembly in 1916 but did not officially open until July 4, 1919.Known to locals as the “State Roads Bridge,” it… Read more » 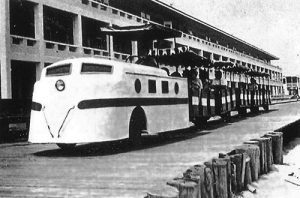 The original “Boardwalk Train” was five cars long plus an engine that actually looked like a train. Each car carried a maximum of six people and had just two wheels with the axle in the middle. It cost 25 cents for a one-way trip down the Boardwalk and it was a bumpy ride.On June 23,… Read more » 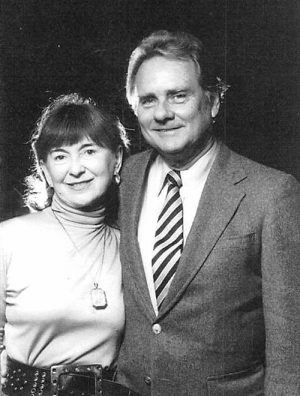 Phillips Crab House began in 1956 when Brice and Shirley Phillips opened a small carryout shop near 20th Street and Philadelphia A venue. The Dorchester County natives thought it was a way to sell surplus crabs from the family processing plant on Hoopers Island. By 1960 it had turned into one of Ocean City’s most… Read more » 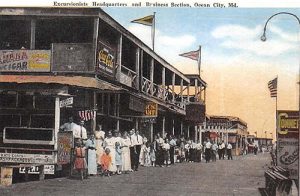 A permanent Boardwalk was constructed in 1885 and extended for eight blocks along the oceanfront. Styles were more formal in the 1880s and 1890s — men in suits and ties and ladies in long dresses and big hats were normal attire for strolling Ocean City’s early Boardwalk.Both the Boardwalk and beach were narrow in those… Read more » 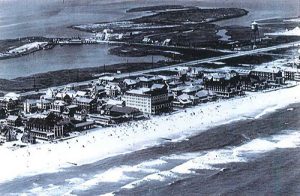 Ocean City was a seasonal small town in 1946. The season ran from Memorial Day to Labor Day. It was said you could fire a cannon down Baltimore Avenue after Labor Day and not hit a single soul.The Boardwalk ended at 15th Street and Coastal Highway and was only one lane north and one lane south…. Read more » 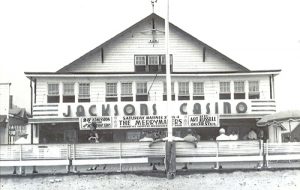 Jackson’s Casino was Ocean City’s most popular nightclub in the late 1930s and throughout the 1940s. Music, drinks and slot machines were the main attraction at the big wooden building on the Boardwalk between 9th and 10th streets.Jackson’s was where the locals hung out and many still recall the special façade built to meet blackout requirements during… Read more » 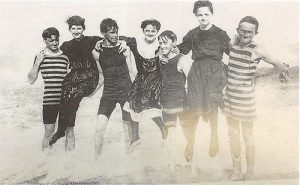 Fashions in Ocean City’s early days bore little resemblance to what is seen on the beach today. Swimming attire, especially for women, was far different and made from yards of material that covered ladies from neck to knees. Although modesty was certainly achieved, the ability to swim in such an outfit- particularly when wet –… Read more » 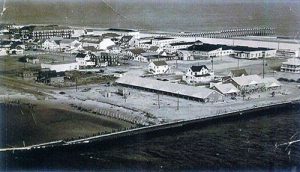 Prior to the mid-1970s, Ocean City was a seasonal resort. The tourist season ran from Memorial Day weekend to Labor Day and it was said, “you could fire a cannon down Baltimore Avenue the day after Labor Day and not hit a soul.” Less than 900 people lived in town year-round.This aerial photo from the… Read more »