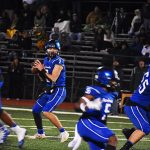 The Seahawks led 7-0 after one quarter and 14-6 at the half. Decatur scored 14 points in both the third and fourth quarters to pull away from the Lions, who were held scoreless in the second half.

With the win, Decatur advanced to the 2A-East sectional championship with a road game against Bayside South rival Wicomico on Friday. The Seahawks lost a close one to Wicomico, 47-41, in a regular season meeting back on September 24.

Against the Lions, quarterback Ashten Snelsire completed 20 passes on 25 attempts including three touchdowns. Snelsire also ran for a 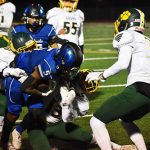 Decatur running back Zimere Handy plows through the Lions’ defense on the way to a big gain. Handy rushed for one touchdown and caught a touchdown pass for another score.
Photo by Steve Green