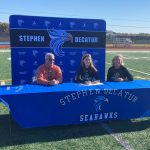 continue their academic and athletic careers at the next level next year.

“This is our first-ever signing ceremony in our stadium,” he said. “It’s a very exciting day. These girls taking their academic and athletic careers to the next level speaks volumes about our lacrosse program here at Decatur.”

“What a wonderful day, and what a wonderful venue,” he said. “This is the first time doing something like this at our beautiful stadium. There were certain things that came out of COVID and this might be one of them. We wanted to do this outside.”

Meredith Eitel is heading to St. Leo’s University in Florida where she will play Division II lacrosse starting next year. Coach Lindsay Owens said Eitel is a true team player who challenges her teammates and her coaches on the field.

“She was one of the first players to believe in this new coaching staff,” she said. “She challenged me as a player, which, I believe is the first time that has happened.” 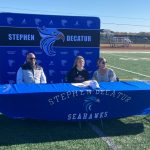 Decatur’s Emma Meyer last week signed a national letter of intent to continue her career at Gardner-Webb University next year. Pictured above is Meyer (center) with parents Jeremy (left) and Allison (right).
Photo by Shawn Soper

Eitel will be a four-year starter on varsity for Decatur and was named Second Team All-Bayside Conference. She maintains a 3.9 grade average and is a member of Minds in Motion, We Excell and the National Honor Society among other accomplishments.

Emma Meyer is heading to Division I Gardner-Webb University in North Carolina and the Big South Conference. Owens said Meyer made a big impression on her as she battled back from an injury prior to her junior year.

“She really inspired me,” she said. “She stayed positive and came to every practice and every game and led from the sidelines. Emma waited patiently to work her way back into the starting lineup.”

Meyer was named Second Team All-Bayside Conference last year. She maintains a 4.0 grade point average and was named to the Principal’s List for four years. She is also a member of the National Honor Society.

Darby Moore is heading to Division II Queens University in Charlotte next year. Owens said Moore was the catalyst for the Decatur offense last 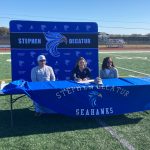 “She is an offensive star,” she said. “Darby is one of the most passionate lacrosse players I have ever coached. She challenges me to view lacrosse in a different lens. She played with a stress factor in her foot during our last two playoff gams in a lot of pain and that took a lot of courage.”

Moore will be a four-year starter at Decatur and was named Rookie of the Year in her freshmen year and Offensive Player of the Year in the conference last year. She maintains a 4.0 grade point average and is a member of the National Honor Society.