OCEAN CITY — Ocean City is working on identifying potential locations for one or more affordable seasonal workforce housing projects and the park-and-ride in West Ocean City has emerged as the front-runner.

On Tuesday, the Mayor and Council heard a presentation from Holtz Builders of Wisconsin expressing a desire to build one or more dormitory-style seasonal workforce housing projects in and around the resort area. Holtz Builders has had success in developing seasonal workforce housing in other resort areas to help address labor shortages and provide clean, safe and affordable accommodations for employees, both international J-1 visa students and domestic employees.

The company has expressed an interest in developing a project in Ocean City to help with the resort’s critical seasonal employee shortage and affordable housing needs. Holtz Builders President Dan Bullock, with Greater Ocean City Chamber of Commerce Executive Direct Lachelle Scarlato, earlier this summer scouted potential locations, each with its challenges. The first and favored option is to build dormitory-style workforce housing on a portion of the park-and-ride in West Ocean City.

The conceptual plan calls for three buildings on the park-and-ride property, each four stories high that would house as many as 1,000 seasonal workers. The option is preferred because its located in and around a favorable public transportation system including a shuttle into town and a connection with the city’s municipal bus system.

Another option is the town’s municipal parking lot at 100th Street uptown. Another option discussed is repurposing some of the area around the old 94th Street mall, which is privately owned.

In the downtown area, Holtz has identified a site on Dorchester Street, but Bullock said the small site might not accomplish the workforce housing goals. Yet another option is the Ocean City Development Corporation (OCDC) model block downtown. The OCDC for years has been piecemeal acquiring property around Somerset Street for it model block program, and the site could be targeted as a potential area for workforce housing.

Whatever site or sites ultimately chosen, Bullock said Holtz is ready to invest $20 million into seasonal workforce housing in Ocean City. Holtz would build and operate the workforce housing facilities. The town’s role would be partnering in property acquisition or assisting with grants or tax abatements and such. However that plays out, Scarlato said on Tuesday the labor shortage in the resort is acute.

“The single biggest challenge facing Ocean City at this time is a lack of seasonal workforce,” she said. “Holtz Builders offers affordable, fair workforce housing. We are at a critical juncture. We had great numbers of visitors this year. In many cases, businesses had to meet that challenge with one fourth of the staff.”

Bullock said Holtz Builders is best suited to take the lead on developing affordable seasonal workforce housing in the resort.

Bullock said Holtz would build one or more projects at its own expense and somewhat defined the town’s role in the process.

“Having the housing affordable is the key,” he said. “We can talk about things like tax abatements or grants later. A parking exception might be important because most of the seasonal workers don’t have vehicles. They tend to ride bikes and use public transportation.”

Bullock said the key is keeping the cost of living here and working here affordable for seasonal employees.

“We want to keep the rent down,” he said. “The focus is on safety, functionality and affordability. It’s truly a community-based solution. We’ve done 15 of these projects. We have it figured out.”

Council Secretary Tony DeLuca said it might be short-sighted to focus on a single project to start.

“We probably need 3,000 beds,” he said. “We have over 4,000 seasonal workers in a typical year. We will probably need more than one property. We might need two or three or more of these facilities.”

Mayor Rick Meehan said he preferred the park-and-ride option to start and build from there.

“I think this is a good site,” he said. “We probably need multiple sites, but we can only build one at a time. I think we should move forward with the appropriate early steps to see if this is viable.  This is the site we have the most control over.”

Councilman Mark Paddack said the park-and-ride makes sense, but questioned who would benefit from such a project the most.

“The transportation hub is in place,” he said. “What benefit would this have to the taxpayers that own that property? I see the benefit to the business community. I also see some conflict with our private sector business owners that rent to the seasonal workers.”

There was some question about the status of the J-1 program and if it would be restored to pre-pandemic levels. Scarlato said the number of visas issued was directly related to the availability of housing

“The state department doesn’t put limitations on the number of visas,” she said. “The limitations are based on the availability of affordable housing.”

DeLuca emphasized the importance of looking at the bigger picture.

“I don’t see why we can’t do three to four of these in five years,” he said. “It’s critical to Ocean City. Why can’t [City Manager] Doug Miller start working with Holtz on the park-and-ride? Why can’t we start exploring the 100th Street site? We can form a panel from the council to work with the OCDC.”

DeLuca made a motion to start preliminary work on the park-and-ride location and 100th Street and form a panel to work with the OCDC and the private sector on the other identified sites.

Councilman Lloyd Martin said he preferred the park-and-ride as a preliminary site, but held out reservations about losing the 100th Street municipal lot in the future.

“I really like the park-and-ride option,” he said. “We can work with the private sector on the 94th Street option and see if there is any potential there. With 100th Street, we could solve one problem and create another one.’

DeLuca amended his motion to include preliminary planning on all the proposed options and to work with the OCDC on the potential downtown options. The motion passed 6-0 with Councilman John Gehrig absent.

In related news, during an online discussion Wednesday, the Community Development Network of Maryland and the OCDC highlighted a 54-person workforce housing project at 104 Dorchester Street. 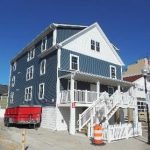 A new building on Dorchester Street is expected to house more than 50 seasonal workers next summer. Submitted Photo

The project was developed by Beachhurst LLC, a family-owned firm, with support from the OCDC and the Maryland Department of Housing & Community Development.

“We fell in love with Ocean City, so we decided to make it a home for others. We hope these students enjoy it as much as we do,” said Stamati Stakias, who is leading the project development.

“In order to be able to sustain the regional economy a long-term solution must be found to address the shortage of seasonal workforce housing in Ocean City,” said Scarlato.  “The Greater Ocean City Chamber of Commerce is committed to finding solutions and resources that will benefit the business community. Seasonal workforce housing is at the forefront of challenges that must be rectified in order to support the business community we serve.”

OCDC Executive Director Glenn Irwin added, “The lack of workforce housing has a dramatic impact on the business community. Our organization is continuing to invest in workforce housing, but more is needed to make sure we have the workers we need every year.”