OCEAN CITY — An entire city block in the downtown area could become a major hotel, conference center and restaurant and retail complex after resort planners this week tacitly approved the conceptual plans. 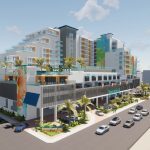 On Tuesday, the developers presented tentative plans to the Ocean City Planning Commission in order to gage the body’s general feelings about the project. Again, the project is in its very early stages in the approval process and there are numerous details to work out including on-site parking issues and the disposition of the city-owned alley, essentially Washington Lane. The commission voiced some early concerns about the amount of on-site parking for the vast project, along with concerns about the retaining public access to the alley, but by and large, the commission endorsed the plan conceptually.

Local attorney Hugh Cropper said the intent on Tuesday was to essentially gage the commission’s overall feelings and concerns about the proposed project before making a formal presentation.

“The developers decided to bring this plan to you and get your ideas before making a formal submission,” he said. “In a prior informal step in the process, they appeared before the Mayor and Council to discuss a sale, abandonment or other way to acquire the alley. Conceptually, the Mayor and Council approved that, which will allow us to move forward.”

The proposed Margaritaville project includes about 265 motel rooms, conference and convention space, restaurants and bars, indoor and outdoor pools and upscale retail along the Boardwalk. Cropper said the intent on Tuesday was to merely gage the planning commission’s potential concerns as the project moves from conceptual to a formal presentation.

The project would require a planned overlay district (POD) approval in order to be accomplished as planned. A POD requires at least 90,000 square feet and the current site includes about 85,000 square feet. If the section of Washington Lane that bisects the property was conveyed to the developer and returned to the city as a public easement, it would meet the 90,000-square-foot minimum for a POD.

Again, the Mayor and Council last week conceptually agreed to conveying the alley to the developer if it was retained as public right-of-way for vehicular, bicycle and pedestrian traffic. Cropper said the intent on Wednesday was to gauge the commission’s interest in moving forward with the project. 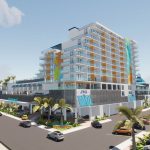 “At the end of the day, we’re just looking for what you think about the project,” he said. “It’s a great opportunity. There aren’t many planned overlay districts in Ocean City. This is an opportunity to take a whole city block and use a holistic master plan with some really great features.”

Former Zoning Administrator Blaine Smith, who oversaw numerous redevelopment projects over the years before retiring, has been retained as a consultant on the Margaritaville project. He said the new property owners have been carefully designing the proposed project.

“They have been working on this project for over a year and we’re close to putting together a formal presentation,” he said. “The master plan calls for creating projects such as this to make Ocean City a destination point. We believe a project such as this will meet a lot of the goals of the master plan to boost economic development and help tourism in general. That is our industry.”

“The Beach Plaza has a lot of history, but we have an opportunity to really utilize this block where it’s somewhat underutilized currently,” he said. “There is an opportunity to really create something of interest with this. The developer is interested in bringing a top-notch, high-scale hotel into Ocean City. We believe this project will meet the goals of the master plan without placing a burden on the infrastructure. It’s a good balance for the neighborhood.”

Smith said the Margaritaville hotel and conference center complex could help draw a different clientele to the downtown area.

“We believe everything about this will be very positive,” he said. “It will enhance the experience people have when they come to Ocean City. We believe what we do here will complement the effort to bring the type of clientele to Ocean City that will make a difference.”

Planning Commissioner Peck Miller praised the conceptual plans for the project, but voiced some concerns on the potential impact on the surrounding neighborhoods.

“That’s a beautiful project,” he said. “I think it’s going to be great for Ocean City. This is a major change in use. It’s a much more intense project than what was there before.”

Project architect Jack Mumford pointed out the decades-long redevelopment of the Baltimore Avenue corridor, known by many as old hotel row for decades, and said the Margaritaville project represents a continuation of that evolution. 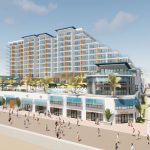 “Twenty years ago, that was not the city’s prettiest area,” he said. “As a result of the city’s investment in Baltimore Avenue along the way, the real estate has improved substantially. If we want Baltimore Avenue to improve from North Division up to 15th Street, this is the type of project we need. This project, along with others, will allow the city to help pay for the bond for the infrastructure improvements.”

Mumford was referring to the city’s plan for major upgrades along Baltimore Avenue from North Division Street to 15th Street. Funding is in place for a major redesign study of the corridor with long-term plans to widen sidewalks, underground utilities and the like.

Planning Commission members debated the amount of on-site parking available under the conceptual plan along with concerns about transferring ownership of the existing alley to the developer along with other issues. By and large though, they supported the concept.

“It sounds like we have concerns about the alleyway and the tunnel affect and it needs to remain accessible,” said Planning Commission chair Pam Buckley. “We also have concerns about the parking. Anytime we’re bringing in a large project and redeveloping such a significant site in Ocean City, those are things we need to take a close look at. This is a beautiful project. It’s wonderful. It has to be a balancing act. That’s what we’re going to have to be convinced of.”

Buckley said through the lengthy approval process, there would likely have to be concessions made from both sides.

“You’ve heard our concerns,” she said. “If you can address them a little bit more, we can move forward. Always keep in mind we have to balance the give and take. What you guys are getting from the city and what the city is getting from this site development is the balance we have to work with.” 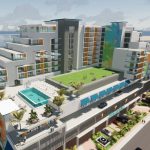