The ever-growing Delmarva ESA recently moved from the Mid-Atlantic District to the Northeast District, and as a result, Ocean City was tapped to host the ESA Northeast Regional Championships, which were held last weekend at the beach at 36th Street. The weather cooperated and the waves were about as good as they get for spring in Ocean City for the first major surfing championship held in the resort in nearly a decade. Ocean City was the site of the ESA’s first regional event in 1985 and the last big surf event in the resort was held in 2013.

Competitors of all ages, from Virginia to Maine, including the Great Lakes, descended on Ocean City for the three-day contest last weekend. They were treated to summer-like weather with fun-sized contestable waves, according to ESA Executive Director Michelle Sommers, who is from the resort area.

“We had the best conditions for a surf contest,” she said. “Everyone said how amazing the town of Ocean City is and how impressed they were with the location for the event.”

The Delmarva ESA district was well-represented in the competition with the most competitors in the contest who qualified for the ESA regionals in contests in 2020. At over 200 members strong, the Delmarva District is one of the largest in the ESA.

“Our local district continues to grow year after year and it’s a testament to the stoke our members have,” said Delmarva ESA Co-Director Laura Bren.

Hosting the ESA Northeast Regional Championships was a big boon for Ocean City, which is in the midst of rebranding its image as a major sports destination. Because of the large number of competitors from up and down the east coast, along with their families, friends and spectators, the surfing championships last weekend generated an estimated 1,000 room-nights on a weekend in mid-May.

“Ocean City has a special surf community that has brought together families and friends for many generations,” said Mayor Rick Meehan. “Our 10 miles of beach welcomes some of the best waves on the east coast and we are proud to have had the ESA 2021 Northeast Regionals right here in Ocean City. The Eastern Surfing Association is an incredible organization that fosters positive amateur surfing and we look forward to sharing many more waves with their competitors.”

“The Ocean City Surf Club was a proud sponsor of the 2021 ESA Northeast Regional Championship here in Ocean City and we wish to congratulate all of the talented surfers who participated in this awesome event,” he said. “We will definitely continue our sponsorship moving forward.”

The Ocean City Surf Club, along with the town of Ocean City, was just one of many local sponsors for the ESA championships last week. Laura Bren thanked the many businesses that supported the event, a list too long to enumerate.

“The support from our local community is amazing,” she said. “So many people came together to give of their resources, both time and financial, to make these events happen.”

As far as the competition itself, Delmarva ESA turned in strong performances with several winners in individual categories. In the boys under 12 division, Gavin Bren finished first. Bren also finished first in the Sharkbanz boys under-14 division. Also in the boy’s under-12 division, Reef Henson finished third and Christian Winter came in fifth. 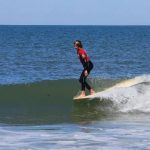 Austin Bren, who finished first in the open longboard division, is pictured on a solid ride. Photo by MEZ/ESM & ESA