BERLIN – Atlantic General Hospital announced it is one of the first six treatment sites within the state of Maryland to offer the monoclonal antibody therapeutic bamlanivimab for high risk patients with mild to moderate COVID-19 infection.

Bamlanivimab is an infusion therapy granted emergency use authorization by the U.S. Food and Drug Administration for treatment of individuals with COVID-19 before severe symptoms occur, to reduce the chances of the infection worsening and requiring hospitalization.

Due to the limited doses available nationwide, treatment is only offered for adults and children ages 12 and older at greatest risk of progressing to severe COVID-19, based upon specific criteria established by the FDA.

These criteria include being over the age of 65, having an underlying chronic condition like diabetes or severe obesity, and/or having a compromised immune system.

Bamlanivimab should be administered as soon as possible after a positive COVID-19 test, as it is most beneficial when given early in symptom progression. It is administered via a single intravenous infusion and mimics immune system antibodies that block viruses.

Not all individuals who test positive for COVID-19 are recommended to receive bamlanivimab. Bamlanivimab infusion is provided through physician referral only, after it is determined that a patient is a good candidate and at high risk of severe onset.

The transaction was an off-market deal that Trader negotiated and closed from start to finish in approximately three weeks. The center was purchased by a local investor. The North Bay Shopping Center was built in 1985 and is home to local and national tenants that have helped make it a staple of North Ocean City for nearly three decades. The parties in the transaction will remain confidential.

For Trader this transaction becomes part of an impressive resume of shopping centers and net lease deals that he has closed both recently and during his career.

“At Rinnier Development Company, we don’t just focus on what’s on the market,” Trader said. “We are constantly looking at everything and talking to everybody. If our clients can’t find what they are looking for, we will use all of our energy and resources to find them an asset that fits their needs. We have a 24/7/365 mindset when it comes to Commercial Real Estate Brokerage. It’s at the core of everything we do. I believe that is what leads us to deals like this. Speaking of which, I appreciate the opportunity I was given to bring this deal to fruition. I believe both parties accomplished their goals and more importantly achieved great value. I believe the asset traded in this deal is an exceptional product that will provide great dividends for years to come”. 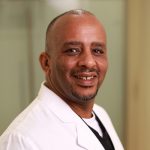 Prior to moving to the Eastern Shore, Dejenie practiced at Parkview Regional Medical Center in Fort Wayne, Ind., and then Medstar Health’s Southern Maryland Hospital and Montgomery Medical Center.

Dejenie completed his internship and residency in internal medicine as well as his gastroenterology fellowship at Howard University Hospital in Washington, D.C. He received his medical degree from Addis Ababa University, Ethiopia. Dejenie is board certified in gastroenterology, and has been diagnosing and treating ailments of the digestive system since 2013.

The restaurant will be located in the Salisbury Promenade Shopping Center joining Barnes and Noble, Eyemart Express, Pivot Physical Therapy, and Great Clips. This is the first location for MISSION BBQ on the Eastern Shore with a proposed opening in spring 2021.

MISSION’s website reads, “MISSION BBQ is unlike any other restaurant concept in the country. We serve the most authentic, mouth-watering all-American food anywhere – with a side order of patriotism! Our team is on a mission to make a difference across the country and in our communities.”  MISSION BBQ utilizes multiple methods to support the military and veterans, such as fundraisers preceding the opening of new locations, giving free food to veterans on their wars’ remembrance days, and hiring local veterans. “We look forward to serving Salisbury,” said Stephen Newton, founder of MISSION BBQ.

Insley previously worked to bring Aldi Grocery Store to the area, and has worked with national retailers Panera Bread and McDonalds to secure locations on the shore. Insley is currently the tenant representative for 7-Eleven Convenience Stores in the region.