OCEAN CITY — A World War I-era submarine sent to the bottom of the sea in a bombing training mission in the 1930s was recently located on the ocean floor of the coast of Ocean City.

Atlantic Wreck Salvage (AWS) and the crew of researchers on the D/V Tenacious on Thursday announced the discovery of the submarine known simply as R-8 off the coast of Ocean City. The vessel has yet to be dived and visually identified, but based on side-scan sonar, the location of the site and the historical record, the research team firmly believes it to be the R-8, a submarine sunk by experimental aerial bomb testing in 1936. The discovery is historically significant because the R-8 is one a few American submarines from that era resting in east coast waters that had yet to have been located.

The R-8 was one of 27 R-class submarines commissioned by the U.S. Navy during World War I, but was not completed before the war ended in 1918. It was finished in that year at a shipyard in Quincy, Mass., the same shipyard that built many of the U.S. Navy’s destroyers and early submarines. Upon completion, the R-8 transited the Panama Canal and became part of the Navy’s Pacific fleet in its early years.

In 1923, the R-8 traveled west to Pearl Harbor, where it participated in training and operations for eight years. In 1927, the R-8 was among the Navy’s fleet searching for pilots who had gone missing during the Dole Air Race, the first airplane race from California to Hawaii.

The R-8 was called back to the east coast in 1930 and became part of the Naval Reserve Fleet in Philadelphia. In February 1936, the R-8 sunk in the Navy Yard and was raised again two months later. However, her days as an active Navy vessel were over and the R-8 was struck from the active list that spring.

“The sonar data leaves little doubt the R-8 has been located,” said renowned sonar expert Garry Kozak of GK Consulting. “The submarine in the image is the correct length, width and height. One set of prominent features of the R-class subs visible in the scan image is the spray rail configuration on the conning tower.”

Captain Eric Takakjian, a noted shipwreck historian, author and wreck hunter, along with Tenacious Captain Joe Mazraani have been working on the R-8 project for many years. When AWS acquired side-scan sonar capabilities earlier this year, Mazraani moved the Tenacious from its home port in Point Pleasant, N.J. to Ocean City as the search for the R-8 drew closer to the finish line 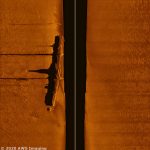 A side scan sonar image of the submarine about 245 feet below the surface is pictured. Photo courtesy of AWS Imagine

Captain Ted Green assisted the research team by providing information about potential targets he had gathered throughout his years captaining the dive boat OC Diver. Veteran wreck diver Mark Nix, who dived with Green on the OC Diver, also became an integral part of the Tenacious research team.

“The discovery of any new vessel is exciting,” said Takakjian, who has discovered over 70 shipwrecks in his career. “It appears from the sonar images that the site will reveal a well-preserved example of an R-class submarine in existence anywhere. We are looking forward to conducting additional research and to diving the wreck in 2021.”

For now, the research team is not releasing any more information about the location or depth of the R-8 until they can dive the wreckage and make a formal identification. Side-scan sonar images reveal the vessel is intact and sits upright on the ocean floor off the coast of Ocean City.

The side-scan images were acquired with a Klein System 3000 and researcher Joseph St. Amand subsequently processed the sonar data using SonarWiz from Chesapeake Technology so the team could compare the vessel on the ocean floor with historical photographs and plans of the R-8.

The R-8 is not the first submarine discovered by the Tenacious team. In 2012, the team discovered the remains of the German U-boat U-550, the last U-boat thought to remain diveable in the North Atlantic. R-8 discovery team members Kozak, Mazraani, Takakjian and Tom Packer were all part of the U-550 discovery team. Members of the R-8 discovery team included Takakjian, Mazraani Green, Kozak, Mark Nix, Packer, Christopher Ogden, Jack Lawniczuk, St. Amand, and Jennifer Selitti.