OCEAN CITY — As it has for the last six years, a quiet but meaningful ceremony including a bonfire was held on the beach this week to remember the tragic plane crash that claimed the lives of two beloved police officers and to award a scholarship in their names.

Seven years ago this week, a small private plane crashed into the ocean off 130th Street, claiming the lives of the pilot and his passenger — Ocean City Police Department (OCPD) officers Tom Geoghegan, Jr., 43, of Ocean City, and Joshua Adickes, 27, of Berlin.

Seven years later, the department, friends and families and the entire resort community still grieve over the unimaginable tragedy with an annual bonfire on the beach in memory of the fallen officers and to ensure their losses are not in vain.

This year, the memorial bonfire held a special meaning for family and friends of the fallen officers with the awarding of the first-ever Josh and Tommy Memorial Scholarship. The two scholarships, each $1,000, will provide financial assistance for educational purposes to candidates seeking to enter the field of public safety. The recipients were OCPD seasonal officers Will Mossop and Justin Koser.

Family and friends of Adickes and Geoghegan established the memorial fund through the Community Foundation of the Eastern Shore.  The scholarship is merit-based and focuses on rewarding ambitious, driven, goal-oriented individuals with a public safety career goal.  To be eligible for the scholarship, individuals must have successfully completed the OCPD’s seasonal police academy.

Geoghegan was originally from Annapolis and began his career with the OCPD as a seasonal officer in 1991. He returned to the department each summer, serving in numerous capacities including a role as an undercover narcotics agent. At the time of his death in 2013, Geoghegan was assigned to the patrol division where he worked on the evening south shift.

Adickes was originally from Long Valley, N.J. and joined the OCPD as a seasonal officer in the summer of 2011. He was hired as a full-time officer in 2012 and was also assigned to the patrol division on the evening south shift at the time of his passing. 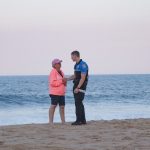 Koser is pictured sharing a conversation with Gerry Adickes, mother of Josh Adickes.

Throughout that fateful Sunday afternoon in June 2013 and overnight into the next day, dozens of OCPD officers, community leaders and private citizens gathered on the beach in a makeshift vigil as crews worked offshore to recover the wreckage. By that Monday night when the scheduled Mayor and Council meeting rolled around, OCPD officers and staffers crammed into council chambers ironically for the swearing-in ceremony of new Chief Ross Buzzuro, but the formality was secondary to the real cause of the impromptu gathering.

“Josh Adickes and Tom Geoghegan were both officers that loved their jobs and served our community well,” said Mayor Rick Meehan. “They were friends, lodge brothers and the loved ones of the people sitting in this room. They loved life, and they loved living in Ocean City, and they loved their police department. What I witnessed today was the compassion of the men and woman of our police department as they rallied around the families of both Josh and Tommy as the families sat on the beach …”

For his part, Buzzuro said, “Although today makes a new beginning, and it is filled with the prospect of opportunity, it is also marked by grief. For today our hearts are heavy and filled with sadness. We will remember and never forget officers Tom Geoghegan and Josh Adickes, who both gave tremendous service to the community and exemplified what it means to be Ocean City’s finest. …”