OCEAN CITY — A New Castle, Del. man faces 20 charges this week after allegedly being part of a group that jumped and robbed a man in downtown Ocean City last Sunday and then ran over one of his alleged co-conspirators with a vehicle in an attempt to get away.

Dominick Mendez-Powell, 20, of New Castle, was charged with robbery, assault and theft after allegedly being part of a group of suspects that attacked and robbed a man at a downtown Ocean City motel parking lot last Sunday. After the alleged robbery when the suspects were attempting to leave the scene when they learned police were on the way, Mendez-Powell allegedly ran over one of his co-conspirators, sending the suspect to Shock Trauma, and numerous other charges were added including leaving the scene of an accident involving bodily injury or death.

Around 11:40 p.m. last Sunday, an Ocean City Police Department (OCPD) officer responded to a hotel at 26th Street for a reported vehicle crash involving injuries. Ocean City Communications advised a pedestrian had been struck by a vehicle that left the scene and life-saving measures were being implemented on the victim.

Upon arrival, the OCPD officer observed a vehicle matching the description heading east on 26th Street and effected a traffic stop. The officer detained the driver, later identified a Mendez-Powell, who reportedly told police he had just left the hotel where he had been in an altercation with a male who had made rude comments to females outside his room.

Another OCPD officer arrived on the scene and found a male victim laying on the ground near the parking lot at 26th Street with the Ocean City Fire Department treating him for facial injuries. Meanwhile, Mendez-Powell exhibited signs of being under the influence when questioned by police and did not complete field sobriety tests to the officers’ satisfaction. According to police reports, Mendez-Powell told police he had smoked marijuana before the incident and left the scene because he did not want anything to do with the incident, according to police reports. 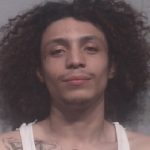 Another OCPD officer reviewed available video surveillance footage of the vehicle-pedestrian footage, which reportedly showed Mendez-Powell’s vehicle backing out of a parking space with the passenger door open and the male victim standing nearby. The surveillance footage reportedly showed the victim getting knocked to the ground by the open car door and then the front end of Mendez-Powell’s vehicle move up and down abruptly as it ran over the head and chest area of the victim.

The victim, John Sarmousakis, 20, of Newark, Del., was flown to Shock Trauma in Baltimore where he remained in stable but serious condition as of mid-week.

While still on the scene, OCPD officers observed another male victim sitting near the hotel parking lot with injuries to his face and body. The victim told police he had just been jumped by a group of individuals and robbed him of his belongings. Officers on the scene identified several people in the parking lot including Logan Lewis, 20, of Wilmington, and Trumye Shackelford, 21, of Newark, Del.

OCPD officers interviewed the juvenile, who reportedly told police Mendez-Powell, Lewis, Shackelford and Sarmousakis were all in the hotel room following the alleged attack and had spread the victim’s belongings out on a bed to determine who was going to keep what. When members of the group learned the police had been called, they reportedly scattered in an attempt to flee, which is when Mendez-Powell allegedly ran over Sarmousakis and fled the scene.

Mendez-Powell, Lewis and Shackelford were each charged with robbery, theft and second-degree assault and each was being held without bond this week. Mendez-Powell also faces 17 other serious traffic-related counts including driving while impaired and leaving the scene related to the hit-and-run incident.