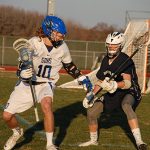 This week five years ago, Decatur’s Jackson Mumford, pictured above, scored two goals against Saints Peter and Paul in the Seahawks’ season opener. Mumford went on to play college lacrosse at Towson University and Gettysburg College.
Photo by Shawn Soper 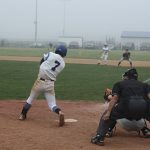 This week five years ago, Decatur’s Justin Meekins stroked a base hit in for the Seahawks in an early season home game. Meekins went on to star at Salisbury University and was a senior on the Seagulls baseball team this spring before the season was shut down.
Photo by Shawn Soper

•  Stephen Decatur’s boys’ varsity lacrosse team edged Saints Peter and Paul in its season opener this week in 2010. Shane Moore led the Seahawks with three goals and an assist, while Jake Lathroum added a goal and an assist. Jackson Mumford and Steve Alther each scored two goals. Will Hastings recorded eight saves in the net and Dryden Brous grabbed 11 of 16 faceoffs.

•  Stephen Decatur’s loaded varsity baseball team got its season off to a great start with an 11-0 win over Mardela in the season opener. Ryan Bennett got the Seahawks off to a fast start with a bases-clearing double in the very first inning and pitcher Sean Colgan scattered a couple of hits on his way to a shutout. Other notables for Decatur on the field that day included Justin Meekins, Grant Donahue, Zach Adams, Brooks Holloway and Tristan McDonough.

• Several young local wrestlers from the Eastern Shore Intensive Wrestling Club who would later go on to become fixtures on Stephen Decatur’s two-time state championship winning team years later, won their matches in the prestigious Mason Dixon Classic, featuring some of the top wrestlers from all over the region. The Mason Dixon Classic featured the top young wrestlers from all over Maryland, Delaware and Virginia, many of whom would go on to do great things at the high school level. Winning championships in their respective weight divisions were Anthony Caruso, Nico D’Amico, Noah Reho, Jagger Clapsadle, James Parana, Alex Koulikov, most of whom were key wrestlers on the 2019-2020 state championship for Decatur.

•  Worcester Prep’s boys’ varsity lacrosse team rolled past old rival Salisbury School, 17-1, in its season opener. The Mallards, loaded with upperclassmen and a promising group of young players, cruised past the Dragons in the first game of the year for both teams. Justin Butler scored two goals and dished out two assists, Brad Regan scored twice and added an assist and Alex Ternahan had a goal and two assists. Hunter Marshall also scored a goal and grabbed eight ground balls.

• Stephen Decatur’s boys’ varsity lacrosse team dropped a tough one to Easton, 16-11, on the road in its season opener. The Seahawks were in a rebuilding year of sorts after losing several seniors, but hung with Bayside North powerhouse Easton, 16-11, in the end. Curtis Snyder led Decatur with three goals, while Brandon Terlizzi and Brandon Wagner each scored two. Senior goalie Josh O’Ferral was strong in the net for the most part, recording 13 saves.

•  Stephen Decatur’s girls’ varsity lacrosse team started slow, but rolled past Easton, 18-7, in the season opener at home. Neither team had scored until Decatur got on the board with a goal by Bethany Howe with 18 minutes left in the first. After that, the flood gates opened for the Decatur offense and the Seahawks rolled, 18-7. Leigh Anne Flounlacker led the Seahawk attack with six goals, while Howe, Taylor Blazer, Nicole Dougan and Jamie Parker each scored two goals.

•  Stephen Decatur’s loaded varsity baseball team opened the season against rival Bennett and edged the Clippers, 3-2, in a pitcher’s duel. Troy Bennett started on the mound for Decatur and helped his own cause with a couple of RBIs.

•  Worcester Prep’s girls’ varsity lacrosse team jumped all over conference rival Salisbury School, 25-1, in the season opener for both teams. The Mallards scored early and often and never looked back against the Dragons to start a promising season off on a good note. Leading the way for Worcester were Molly Dickerson, Mary Clare Regan and Mary Hudson.

“Everything just fell into place for us today,” said Coach Yetive Delaney. “A lot of the things we practiced hard on this spring came into play this afternoon and the girls just executed them perfectly.”

•  Stephen Decatur’s young but talented varsity softball team routed Bayside South rival Bennett, 9-1, in the season opener. In the prior year, the Seahawks went 13-4 and reached the region semifinals, but most of that core group of seniors had graduated. Maddie Justice started on the mound for the Seahawks and turned in a dominating performance, striking out seven and going the distance in the opener against the Clippers. Justice helped her own cause at the plate, collecting two hits and driving in a pair of runs. Her battery mate, catcher Kylie Nottingham, also had two hits and drove in a pair of runs in the opener.

•  Stephen Decatur’s boys’ varsity lacrosse team opened the season with perhaps its most loaded team ever in the nascent days of the program. First-Team All-Bayside Conference goalkeeper John Apple was back in the net and was fronted by a defense that included Cliff Rogers, Pat Johnson and Brandon Picheirri. The starting midfield included Brandon Altvator, Will Mumford and Josh Hardt. Leading the attack were standouts Brian Harrison, T.J. Carven and Brandon Tolan. The team was coached that year by Steve Berquist, who said “this is the hardest-working, most-focused team I’ve ever had at Decatur.”

•  Stephen Decatur’s girls’ varsity lacrosse team began play in 2000 in only the third year of its existence and the second competing at the varsity level. Coach Lisa Fitzpatrick, who started the program in 1998, had a line-up full of underclassmen who were short on experience and long on enthusiasm. Samantha Ludlum and Casee Wisniewski shared time in goal, while the defense was led by Kathleen Earls, Alana McGeehan and Jen Bunting. The midfield that year was led by Jenn Saunders, Theresa Penn, and Jessica King, now Ocean City Communications Director Jessica Waters. Up front, the attack was led by Krista Heinlen, Kristie Briddell and Meredith Moore. Fitzpatrick said of her fledgling program, “wins are nice, but we’re really just trying to improve our level of play. The players get along and are very eager to learn and play.”