BERLIN – A local artist is bringing a touch of odd and whimsical to downtown Berlin.

For years, artist Patti Backer worked from her home in Berlin. But after learning the space previously occupied by Uncle Jon’s Soap had become available, she and her husband, Jason, decided to open their own art studio and shop.

“We thought it would be really great to have my own studio space and find stuff that goes along with the art,” she said. “We just went for it. We hadn’t been looking at anything, so it just kind of happened. It’s been wonderful.”

With her husband’s help, Backer said the space was transformed into a shop that was just as unique as the items in it. In addition to the bright green walls, patrons can also find a reclaimed display case and a collection of decorative antique lamb figurines, which served as inspiration for The Dusty Lamb’s name.

“In my home studio, I always had a shelf full of these old, rubber lambs,” she said. “They are kind of creepy, but also super cute. That’s also the stuff I look for.”

The Dusty Lamb opened its doors to the public on March 23. 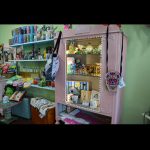 “I’ve definitely heard a lot of people say that this store is different, which makes me happy,” she said. “Also, I like the idea of featuring local artists you don’t see as often, or who aren’t considered mainstream.”

While a lot of the store’s wares are from local vendors, Backer said The Dusty Lamb also features manufactured items, including Mexican market bags, finger puppets and Edward Gorey mugs, to name a few.

“I have a little bit of everything, but it’s all got sort of an odd theme …,” she said. “I also sell a lot of Edward Gorey stuff. He was my favorite artist growing up.” 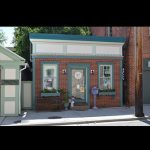 Despite her new business, Backer said she is no stranger to the local merchant scene. For roughly six years, she operated Tumbling Monkeys on Main Street. The building is now home to Island Creamery.

“It’s been much better this time around,” she said. “I’m in the right space and there are more people now.”

She also noted the comradery among Berlin merchants and the efforts of Economic and Community Development Director Ivy Wells and Administrative Assistant Allison Early to promote and support local businesses.

“I feel like people work together more now than they did back then …,” she said. “The town is great, and I hope it stays charming.”

Backer encouraged everyone to visit The Dusty Lamb and shop local.

“You are probably going to see things you wouldn’t see anywhere else,” she said, “and definitely not anywhere else in Berlin.”

The Dusty Lamb is open from noon to 5 p.m. on Monday, 11 a.m. to 5 p.m. Tuesday through Saturday and closed on Sunday.

SNOW HILL – Local officials are entreating the state to increase Worcester County’s COVID-19 vaccine allotment.Billy Birch, the county’s director of emergency services, asked the Worcester County Commissioners on Tuesday to again write to Gov. Larry Hogan and state officials regarding the need for more vaccine doses. There are now more than 6,400 people on… Read more »

Mass Vaccination Site Announced For Salisbury No Later Than March 18

BERLIN — A COVID mass vaccination site on the Eastern Shore will likely open in roughly two weeks, Governor Larry Hogan announced on Tuesday.During his weekly COVID-19 press conference on Tuesday, Hogan outlined the state’s efforts to quickly get vaccines into the arms of those that want and need them, but challenges remain. The state’s… Read more »

ASSATEAGUE — Ten days after a deceased 30-ton humpback whale washed up on Assateague, the creature was finally removed from the beach last weekend, but its presence on the barrier island will likely remain for a while.On Feb. 18, a female humpback whale stranded on the beach at Assateague for reasons unknown and perished. Throughout… Read more »

SNOW HILL – Final repairs are being made to the town’s new riverboat as officials prepare to bring it to Snow Hill by the end of the month.As repairs near completion, the Town of Snow Hill has spent the past several weeks seeking proposals from potential operators of what is essentially a floating restaurant. Proposals… Read more »