BERLIN- Stephen Decatur’s girls’ varsity soccer team got in the win column this week with a 9-0 rout of visiting Wicomico on Tuesday.

The Seahawks started the 2018 season with three straight games against tough Bayside North teams and came through the stretch with an 0-3 mark. Something had to give on Tuesday when Decatur took on Bayside South rival Wicomico at home and the Seahawks vented a little frustration on the Tribe. 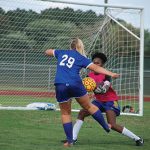 Decatur’s Brittyn Leonard battles the Wicomico goalkeeper for a loose ball during Tuesday’s 9-0 win over the Tribe.
Photo by Shawn Soper

Decatur took an early lead and led 2-0 about half way through the first half before a scoring binge basically settled the issue once and for all. Alyssa Romano got the scoring run started for the Seahawks with a hard shot from the perimeter to extend the lead to 3-0 with 14:50 left in the first half.

About two minutes later, Brittyn Leonard weaved her way through the WiHi defense and fired a low shot past the diving goalkeeper to push the lead to 4-0 with 12:54 remaining in the first. Decatur added another goal at the 10-minute mark and tacked on the sixth and final goal of the first half with just over two minutes remaining. The Seahawks added three more goals in the second half and cruised to the 9-0 win.