OCEAN CITY — One victim from a plane crash in the ocean has been recovered but the search for a second has been suspended due to the current storm battering the mid-Atlantic coast. 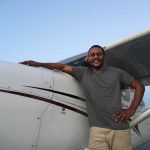 Marcson Ngwa was one of the confirmed occupants of the plane that has believed to have crashed in the ocean. Photo courtesy of Facebook

According to a Coast Guard release, the plane was seen practicing touch-and-go landings at the Ocean City Municipal Airport on Wednesday evening. Shortly after 10 a.m. on Thursday, federal officials notified the Maryland State Police (MSP) Special Operations Division that the aircraft had not returned to Martin State Airport as expected.

Around 11:30 a.m. on Thursday, an MSP Aviation Command Trooper 4 and Civil Air Patrol crew located what was described as an oil slick in the ocean about 1.5 miles from the Ocean City Municipal Airport. According to sources, an airplane tire was found floating in the oil slick.

According to the MSP, rescue personnel continued to focus their search on the area late Thursday afternoon. Throughout the afternoon on Thursday, sources have confirmed debris consistent with an airplane has been recovered in a vast area off the coast, including some as far as five miles out. In addition, a Maryland Natural Resources Police (NRP) dive team was searching for possible victims in the area where the oil slick was discovered.

Shortly before 5 p.m. on Thursday, Maryland State Police, the NRP and the Coast Guard conducted side-scanning operations in an underwater debris field. The debris field was located approximately five miles from the initial oil slick.

Rescue personnel determined the aircraft was in a severely deteriorated condition and a body was recovered from among pieces of the plane. The recovered body was a male wearing the same clothing as described on the pilot who left Martin State Airport on Wednesday, presumably Robinson. Authorities did not identify the body recovered. The deceased is being transported to the Office of the Chief Medical Examiner in Baltimore for an autopsy.

Search efforts concluded just before 6 p.m. on Thursday as a monster storm began to arrive along the mid-Atlantic coast. Dive teams will resume search and recovery efforts once the storm passes and ocean conditions improve.

According to Ocean City Emergency Management, the storm, which is already bring extreme high winds reaching as high as 70 mph and rain, is expected to linger in the resort area throughout the weekend.

The Maryland State Police Underwater Recovery Unit with assistance from the U.S. Coast Guard, the NRP, the Worcester County Sheriff’s Office, MSP troopers and members of the Air Force Rescue Coordination Center are conducting the search and rescue operation and the investigation continues. A command center was established at the Maryland NRP Boathouse at the commercial harbor in West Ocean City.

Little is known about the victims at this point. Marcson Ngwa’s Facebook page identifies him as a self-employed entrepreneur and aviator and a banner picture on the top of his page shows an airplane. His Facebook page reveals he posted a “today’s motivation” every day without fail.