OCEAN CITY — A Pennsylvania man was arrested on assault and malicious destruction of property charges this week after allegedly head-butting his wife and smashing her cell phone during a domestic dispute in an uptown condo parking lot.

Around 3 a.m. on Tuesday, Ocean City Police Department (OCPD) officers responded to the Golden Sands condominium for a reported domestic assault. Officers met with a female victim who told police she had been in an argument with her husband, later identified as Jerald Reimenschneider, 50, of Womelsdorf, Pa. The victim told police she attempted to leave when she found Reimenschneider sleeping in their vehicle.

OCPD officers caught up with Reimenschneider a short time later driving through the parking lot of a nearby hotel. Reimenschneider told police he had been an argument with the victim, but that he had just pushed her away when she began poking him. He did admit smashing her cellphone. Based on the evidence and testimony, Reimenschneider was arrested and charged with second-degree assault and malicious destruction of property.

PARSONSBURG — A Parsonsburg man was arrested on attempted murder charges this week after allegedly firing a handgun in the direction of a female victim during an argument.

Around 9 p.m. on Monday, Wicomico County Sheriff’s deputies responded to a residence in Parsonsburg for a report of shots being fired. Deputies met with a female victim who advised she had been in an argument with a suspect identified as Thomas Reeser, 59, of Parsonsburg, that culminated with Reeser allegedly firing shots at her from a handgun.

According to the victim’s statement, Reeser brandished the handgun during the argument and pointed it straight at her face. As the argument escalated, Reeser fired the handgun while the victim was just a few feet away. The victim told police she could feel the gun discharge near her and that she temporarily lost hearing due to its close proximity. The victim told police she feared for her life and ran from the residence.

Based on the testimony, Reeser was arrested and charged with attempted first-degree murder, first- and second-degree assault, reckless endangerment and use of a firearm during a crime of violence. Reeser was taken before a District Court Commissioner and was ordered to be held without bond.

SALISBURY — A Salisbury woman was arrested on assault charges this week after allegedly firing a “warning shot” at her boyfriend during a domestic dispute on Christmas.

Around 3:45 p.m. last Sunday, a Wicomico County Sheriff’s deputy responded to a residence on Naylor Mill Road for a reported domestic dispute involving a firearm. The deputy met with a male victim who reported his girlfriend, identified as Jean Nauman, 48, of Salisbury, had discharged a handgun in his direction.

The victim told police Nauman became angry and fired off a shot from a .357 revolver. During the investigation, the deputy located evidence that a round had been fired. In addition, Nauman reportedly admitted discharging the handgun as a “warning shot.”

Nauman was arrested and charged with first- and second-degree assault and reckless endangerment. Nauman was held in custody pending a bond review on Tuesday. She was later released after posting a $2,500 bond. 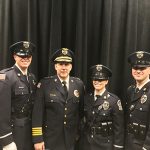 The officers were formally recognized as certified police officers of the OCPD after 24 weeks of intense training. The academy’s recruit class stemmed from various law enforcement agencies throughout Maryland’s Eastern Shore.

Recent OCPD graduates consistently earned top honors from the police academy and the three new officers that have joined the department have lived up to that tradition. Faggert and Johnson each earned the Physical Fitness Award. Faggert and Vincent each earned Firearms Proficiency Awards and Vincent also earned the Leadership Award.

“We strive to provide the Ocean City community with the best and brightest officers we can find,” said OCPD Chief Ross Buzzuro. “All three of our newest officers excelled in the seasonal program and that experience will assist them tremendously. Each of them are sure to be a great addition to the Ocean City Police Department.”

After their graduation from the police academy, the new officers will enter into a nine-week field training program. During this time, the officers will hone the skills they acquired in the police academy under the direct supervision of a veteran OCPD field training officer. They will be routinely evaluated and critiqued on their performance and will train with the various shifts and divisions that make up the OCPD.

OCEAN CITY — An Ocean City man, arrested in May on heroin distribution and handgun charges, pleaded guilty this week and was sentenced to five years, all but six months of which was then suspended.

Around 9:30 a.m. on May 25, an Ocean City Police Department (OCPD) officer was dispatched to check on the welfare of an individual slumped over in his vehicle parked behind a store on 33rd Street. The officer arrived on the scene and observed a male suspect later identified as Thomas Chris Kranias, 24, of Ocean City, seated in the driver’s seat with the ignition on and the vehicle in park.

According to police reports, Kranias’ head was slumped over his chest with saliva hanging from his mouth. The officer opened the door and Kranias opened his eyes and appeared to be dazed. When asked if he was having a medical problem, Kranias told police he was okay. The officer asked Kranias to step out of the vehicle and asked if he had anything on him or in the vehicle he shouldn’t have and Kranias reportedly said no and told the officer to search his vehicle. When asked if the officer could search his person, Kranias consented and put his hands in the air.

In Kranias’ front shorts pocket, the officer located a partially torn piece of blue wax paper consistent with how heroin is packaged. The officer then searched the vehicle and located several similar pieces of torn wax paper stamped in red ink with the word “Tyson” and an image similar to a boxer. Inside the blue wax paper packages was suspected heroin. At that point, Kranias was arrested for possession of heroin.

During the vehicle search, the officer located a duffel bag in the trunk with a handgun inside wrapped in a small towel. The handgun was a Smith and Wesson .357 magnum which was not loaded. There was a box of 20 rounds of ammunition in the duffel bag with the handgun, however. It was later revealed Kranias did not have a concealed gun carry permit.

This week, Kranias pleaded guilty to possession with intent to distribute heroin and possession of a handgun in a vehicle and was sentenced to five years, all but six months of which was suspended. Kranias was then placed on probation for three years.

SNOW HILL — A Catonsville man, arrested in June on drug distribution charges after selling Molly to undercover Ocean City Police Department (OCPD) officers, pleaded guilty this week and was sentenced to three years, all of which was suspended in favor of probation and a fine.

Shortly after midnight on June 5, two OCPD officers working in an undercover capacity were attempting to purchase illegal drugs from random individuals when they encountered a suspect later identified as Raymond Snyder, 27, of Catonsville, at the corner of 6th Street and Wilmington Lane. The undercover officers asked Snyder if he knew where they could purchase some “percs,” a common street name for oxycodone.

Snyder allegedly approached the officers’ vehicle and told police he did not have any “percs,” but said he had some MDMA, or Molly, for sale. The officers told Snyder they were interested in purchasing $40 worth of Molly and the suspect agreed to supply a half a gram of the illegal drug for the money offered. Snyder then offered his cell phone number in case the officer wanted additional Molly at a later date, according to police reports.

The officer completed the transaction and parted ways with Snyder. Immediately after the transaction, a uniformed OCPD officer detained Snyder and arrested him for possession and distribution of MDMA. Following the arrest, additional suboxone was found on Snyder’s person.

Around 6:30 p.m. last Wednesday, the Ocean Pines Volunteer Fire Department responded to a reported residential fire on Ocean Parkway. By the time the OCVFD had arrived, the fire had been extinguished. The fire was contained to a bedroom in the residence although smoke damage was reported throughout the house. No injuries were reported. Anyone with information is urged to contact the Worcester County Fire Marshal’s Office at 410-632-5666.