OCEAN PINES – A 12-year-old boy from Ocean Pines has written and published his first children’s book.

Benjamin Brunori, author of “The Great Cat Sled Race,” takes readers through the adventures of a Chesapeake Bay retriever named Stormy and her journey to compete in a dog sled race using her five cats.

“It’s about my dog Stormy,” Brunori said. “She wants to prove that cats in the world can be used in sled races, too.”

The young author said inspiration for the book came from childhood memories of reading bedtime stories with his mother.

“Whenever I went to see my mom, we would always read before bed,” he said. “And I thought this would be a good book to do that.”

The book, written when Brunori was in fifth grade, took nearly two years to edit and publish, he said. With the help of his aunt, published author Kristen Painter, “The Great Cat Sled Race” became a reality.

Painter, an urban fantasy and paranormal romance writer, took the lead as both editor and publisher for the book, and spent time with her nephew editing the story through emails and in person, when Brunori would visit her in Florida.

“I refer to it as my passion project,” she said. “I’ve never put out a kids book, but it has been a learning experience.”

Both Painter and Brunori said they spent much of their time editing and changing the story to add humor for younger audiences.

“I think like most boys and what interests them, the first draft had more bathroom humor in it,” Painter joked. “But it was such a cute idea. I said, ‘Ben, maybe we can publish it.’” 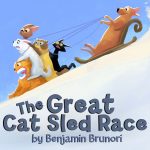 The cover of the book, “The Great Cat Sled Race,” is shown.

To tell the story, Painter enlisted the help of illustrator JoJo Leong, a young up-and-coming artist she found on DeviantArt, to depict the scenes.

“You want someone reasonable, and the pictures have to have the right feeling,” she said. “I didn’t want it too cartoony.”

With the help of a formatter and Leong’s illustrations, the team successfully created a visual and literary composition.

Brunori said he has always enjoyed writing, but didn’t think he would ever be a published author.

“This wasn’t really a goal of mine until I wrote it, and then it kind of was,” he said.

The young author said he is currently working on a new book, which will continue to narrate the adventures of Stormy and her cats.

But for now, Brunori said print and digital copies of “The Great Cat Sled Race” are available on Amazon.

Painter said she doesn’t know how Brunori comes up with his ideas, but added that he has always liked animals and has many aspirations and plans in life.

“In the family, we refer to him as a deep thinker,” she said.

When asked if he has considered a career as a writer, Brunori had one answer.

Brunori and his family live in Ocean Pines with their dog Stormy. He attends Stephen Decatur Middle School.

Painter, his aunt, grew up in the area and attended both Stephen Decatur High School and Salisbury University, where she taught English, before moving to Florida in 2005.