(The story was updated with additional information Wednesday, Sept. 28.)

BERLIN – “Active” and “ongoing” remain the words to describe the current state of the investigation into Gavin Knupp’s hit-and-run death.

One month after the agency’s last public statement on the probe, Maryland State Police spokesperson Elena Russo said Monday there were no further updates on the investigation at this time, confirming, “the investigation is active and ongoing.”

In late August, Russo said, “Crash team investigators continue to follow up on leads while talking to witnesses. This case is active and ongoing while police seek anyone with first-hand knowledge of the incident or who may have witnessed the incident to contact police at 410-819-4721. Callers will remain confidential.  Once the investigation is complete, it will be presented to the Worcester County State’s Attorney’s Office for review.”

Knupp was struck and killed by an eastbound black Mercedes Benz on July 11 on Grays Corner Road, which is often used a shortcut between Routes 589 and 50. Knupp was a pedestrian on the road and returning to a vehicle driven by a family member when he was hit by the vehicle, which did not stop and fled the scene. He would die soon after from the collision. The vehicle was recovered six days later from a West Ocean City home in the Ocean Reef community. The motorist has not been officially identified and no charges have been filed in the case to date, as the crash probe continues.

While waiting for the investigation’s findings, the family has recently embarked on a new movement with the creation of the Gavin Knupp Foundation, which aims to keep his memory alive while raising dollars to help the community. The foundation’s initial target is improvements to the skate park in Ocean Pines where the 14-year-old boy spent many days with friends.

At Saturday’s Ocean Pines Association Board meeting, Tiffany Knupp, Gavin’s mother, asked the board to consider renaming the park after her son during the public comments portion.

“I am coming here today to ask you guys for consideration in naming the skate park in honor of him as the Gavin Knupp Skate Park,” she said. “We have started the Gavin Knupp Foundation, and we plan on doing amazing things here. We would like to do improvements to the skate park over the years as far as landscaping, pretty much anything we can think of. We thought of a couple ideas – putting solar powered phone charging stations there, extra seating, things of that nature. And we are working together with our attorneys for a dedication to the skate park through the foundation to make sure things go smooth.”

Board President Doug Parks acknowledged the official request and remanded it for future discussion at another board meeting.

Meanwhile, a website, doitforgavin.com, has been created for the Gavin Knupp Foundation. The website reads, “Gavin was a 14 year old boy who loved hunting, fishing, surfing and skateboarding. He will be remembered for his great sense of humor, his ability to light up a room and his exceptional character. He made friends everywhere he went and will be missed by everyone who knew him. Everyone who had the honor of knowing Gavin is better for doing so.”

A benefit has been planned for Sinepuxent Brewing Company on Oct. 22, 2-7 p.m. The event will feature food, beverages, giveaways, 50/50 raffles, silent auction items and more. Merchandise totaling about $3,000 with the phrase “do it for Gavin” has been sold online as of early this week. The revenue raised, according to the website, will “be able to honor Gavin in a way that shows much he was loved and cherished by so many.”

In a statement released Monday through Neil Dubovsky of the Dubo Law, LLC, a personal injury law firm of Lutherville-Timonium, the Knupp family said, “Keeping Gavin’s memory alive is our main focus right now. We want to do everything and anything to help kids live a life like Gavin’s. The Gavin Knupp Foundation and renaming of the skate park are the first steps of many in keeping Gavin’s legacy alive and we want to thank the community for the support we have received while piecing together this amazing event.”

While family members focus on honoring their son, members of the community have become increasingly outspoken about their concerns about injustice amid the probe’s pace. Drawing ire from some recently was a Facebook comment made by Worcester County State’s Attorney Kristin Heiser before the fatality in early July wishing a happy birthday to Ralph DeAngelus – family member of the alleged motorist involved in the hit-and-run collision. The post was discussed at length online in a Facebook group, “Do It For Gavin-Justice For Gavin,” resulting in a letter writing campaign calling for Heiser to recuse herself and allow another prosecution team from a different jurisdiction to handle the case. The Maryland Attorney General’s Office has always been notified. Heiser’s office will receive the full police report when it’s completed and determine the appropriate charges to file.

A sample letter sent to Heiser was shared with this publication. It read, “I am writing to you concerning the death of 14-year-old Gavin Knupp, son of Raymond Knupp of Wicomico County and Tiffany Knupp of Worcester County.

“It has been 71 days since Gavin was killed in a hit and run on Grays Corner Road in Berlin, Maryland. For 71 days, Gavin’s parents and sister, Summer, have agonized over the lack of movement from your office in charging those responsible for Gavin’s death. As you should be well aware, Gavin was a beloved member of this community who’s life was unfairly ended far too soon. His death has left a gaping hole in the hearts of his family, his friends, and the community at large.

“… It has also been brought to my attention that the Worcester County States Attorney, Ms. Heiser has a friendly relationship with Mr. DeAngelus, a partner in a prominent local restaurant group. This is undoubtedly a conflict of interest and I have grave concern that Gavin’s case will not receive the dedication it deserves if it is handled by your office, when your friendship with Mr. DeAngelus is evident on social media platforms and beyond. I am urging you to hand this case over to another district so that Gavin may receive the justice he so deserves.”

For her part, Heiser confirmed Monday her office has been contacted through email with similar concerns expressed in the letter shared. She said, “Because the investigation is ongoing, I cannot provide any additional comment.”

Through their attorney, the Knupp family issued a statement this week saying, “Having had the opportunity to meet with the State’s Attorney and others in her office, we believe more strongly than ever that those responsible for Gavin’s death will be held accountable to the fullest extent of the law. We thank Kris Heiser, her team and law enforcement for all their hard work to that end.”

In August, the Maryland Department of Transportation State Highway Administration (MDOT SHA) said a formal review of Grays Corner Road will be undertaken once the police report is completed. Whenever a fatality occurs in a crash on a state highway, MDOT SHA spokesperson Shantee Felix said policy is for officials to review the police report and then have, “a traffic engineer to the site for an investigation. The engineer will evaluate things such as sight distance, average speeds, lane markings, etc., and will determine if any engineering changes can be made to make the road safer. Once the report is complete, our traffic engineers will consider a number of options including additional lighting and speed limit reductions.”

About two weeks ago, Maryland Senator Mary Beth Carozza spoke to state representatives following a motorized special event task force meeting in Ocean City regarding community concerns about safety on Grays Corner Road following Knupp’s death. She was told a safety assessment for the road would be completed once the police report was completed, but Carozza pressed for short-term changes in the meantime. As a result, transportation representatives visited the road. Eight additional streetlights were added to existing telephone poles along the road, nearly all of them on the stretch from Route 589 to Glen Riddle. MDOT SHA also double striped the road’s center for no passing. It was previously a dotted yellow line.

“I was very encouraged to see that,” Carozza said. “SHA is also doing a longer-term assessment of Grays Corner Road.” 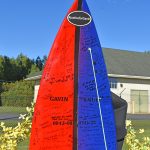 A surfboard at the memorial site is full of personal messages to Gavin Knupp.

Meanwhile, an online petition started by Michael Reed at change.org continues to collect signatures – 3,452 as of Monday – in a grassroots effort to get the road changed to Gavin Knupp Way.

A large memorial site has been created off Grays Corner Road where Knupp was killed back in July. The site features landscaping rocks in the shape of a heart with a sand surface, solar lights, a surfboard with dozens of personal messages penned on it, photos of Knupp, flowers, a tackle box and a bible.

A past review of the events after the fatality can be found here, including statements issued by the family and its attorney as well as the Matt Ortt Companies, which connected itself to the case with a statement a few weeks after the fatal hit-and-run collision