BERLIN – Seven weeks after a local teen died in a hit-and-run collision, authorities are continuing their investigation and seeking the public’s help with any information.

Charges have not yet been filed in the death of Ocean Pines resident Gavin Knupp, 14, who was a pedestrian returning to a vehicle driven by his sister on Grays Corner Road July 11 when he was struck by a black 2011 Mercedes traveling east bound. He would die soon after the 10:45 p.m. collision at Atlantic General Hospital. Though the driver of the Mercedes has reportedly been identified as a suspect of interest, there has been no official information presented confirming police know the motorist’s whereabouts.  Six days after the collision, the Mercedes involved in the fatal hit-and-run was seized from a home in Ocean Reef in West Ocean City for processing.

Today, there remains far more questions than answers in the community. Speculation continues to swirl around the motorist, who was reportedly drinking at the Ocean Pines Yacht Club the same day as the collision. Investigators were observed at the yacht club in the days following the incident questioning staff and patrons. Mounting anxiety over the investigation’s pace is evident on social media. However, the frustrations boiled over two weeks ago when a pointed message was spraypainted on the surface of Grays Corner Road near the site of the Knupp fatality, reading, “F&%# You, (name deleted),” referring to the 22-year-old suspected motorist that fled the scene of the fatal collision. The message was ultimately painted over.

In response to an inquiry from The Dispatch seeking a statement on the lengthy probe into the July 11 incident, Maryland State Police spokesperson Elena Russo advised authorities continue to investigate the incident and seek input from witnesses.

“Crash team investigators continue to follow up on leads while talking to witnesses,” Russo said. “This case is active and ongoing while police seek anyone with first-hand knowledge of the incident or who may have witnessed the incident to contact police at 410-819-4721. Callers will remain confidential. Once the investigation is complete, it will be presented to the Worcester County State’s Attorney’s Office for review.”

State’s Attorney Kris Heiser could not comment on the case Tuesday, saying, “the investigation is still ongoing at this time.”

“While we patiently await the conclusion of the criminal investigation, the family has shown amazing restraint, resilience and strength and taken great comfort from the support of their community and friends,” Dubovsky said. “Those who are responsible for Gavin’s death know who they are, and we will not rest until they have all been held to account.”

Tiffany and Ray Knupp, Gavin Knupp’s parents, reiterated police’s message, encouraging those with any information about the incident to come forward and provide details to investigators. 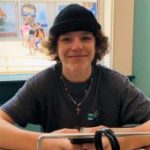 “We continue to have full trust and confidence in law enforcement to complete their investigation and in the legal system to hold those responsible accountable for their crimes,” they said. “We also implore anyone with information related to Gavin’s death to come forward and share that information with the police.”

Tiffany and Ray Knupp added, “We also want to say, as parents, how proud we are of Summer who continues to be a shining light in our lives and the lives of everyone who know her. Her strength and courage inspires us every day.”

“Gavin was a very joyful person. He was one of the funniest people I know. Every time he would walk into a room, he would light it up … he cared more about others than about himself,” she said. “He was always on the go, ready to do something or help someone and try to make everyone laugh. … We were definitely best friends. No siblings I know were as close as me and Gavin. I took him everywhere because I just got my license. I picked him up and I dropped everything for that kid.”

Summer Knupp said being able to fish in the Poor Girls was special for her because one of her little brother’s favorite hobbies was fishing. She said he fished often on a pond they live on.

“Gavin loved fishing … one thing he didn’t get to do was go deep sea fishing, so I wanted to accomplish the one thing he didn’t get to do,” she said. “It was an all-girls tournament, so it was perfect, something I could win and also do for him. … after the tournament, I went to go text him that I won, but I know he was there with me the entire time. I know he definitely helped me bring the fish in. People fight marlins for an hour or so usually, and I brought my first one in, in six minutes and the second in eight minutes. I definitely believe he was there helping me bring the fish in.”

While fishing and at the Bahia Marina registering her releases during the tournament, Knupp and her parents, Tiffany and Ray, wore #doitforgavin T-shirts with a photo of the 14-year-old before his passing. She explained the movement during the interview.

“If you go on Gavin’s Instagram, he would always post skate edits, and he used to tell people ‘do it for the skate edit’ to get people to do crazy things,” she said. “So we thought we should make it ‘do it for Gavin’ so when you do something you are doing it for him. He always wanted everyone to do everything and wanted people to try new things and be the best they could be.”

As a recap, a GoFundMe page, set up immediately after the July 11 fatality, for the Knupp family has raised $49,745 to date.

Amid innuendo and speculation about one or more employees’ connection to the hit-and-run fatality, Matt Ortt Companies, which operates the Ocean Pines food and beverage operations, including the yacht club, as well as several other local restaurants, issued a statement in July on social media confirming a partner in the business had some level of involvement in the situation. The statement, which was ultimately removed from social media after a scathing response from community members, defended partner Ralph DeAngelus, whose girlfriend is the mother of the person of interest. To this day, any post made by Matt Ortt Companies-controlled restaurants are met with #justiceforgavin comments from the Knupp family and friends. The comments are typically deleted quickly by the individual restaurant page administrators.

“On behalf of Matt Ortt Companies, we are aware of a tragic event that has brought pain and heartache to multiple families and our thoughts are with all of those involved. With all of the speculation surrounding this event, I feel the need to say something publicly. I have been in business with Ralph DeAngelus for three decades as a leader, mentor, and partner. During that time, Ralph has always been a man of integrity, which is how he has built such a stellar reputation in our town,” a statement from Managing Member Matt Ortt read in July. “Over the past few years, Matt Ortt Companies has added substantially to the area by revitalizing the Ocean Pines food and beverage operations and starting two new popular restaurants, all of which employ over 400 members of this community. At this time, my focus will be to continue to operate Matt Ortt Companies to the same high standards to which we have always held ourselves.”

The statement continued, “For obvious reasons, Ralph cannot speak about this matter. However, he has said to me directly: ‘In the end, the truth will come out, and it will prove me to be the man you always thought I was.’ I will take him, as I always have, at his word, and I hope the community at large will as well. Ralph has never violated the trust that I put in him, and I don’t expect that to ever change. As the Managing Member of the Matt Ortt Companies, and on behalf of the management team, we stand fully behind Ralph’s word and will continue to wait for all the facts to come out as the investigation proceeds.”

In late July, Ocean City Today received a copy of a statement issued by Matt Ortt Companies partners to the general manager of the Ocean Pines Association. The statement read, “As loving parents, as well as members of the extended Ocean Pines community, we remain heartbroken by the devastating and sudden loss of Gavin Knupp. There are no words to adequately convey our deepest and most sincere sympathies to the Knupp family and all who knew and cherished Gavin’s presence in their lives.

As difficult and seemingly inconsequential as it may seem, there are many questions we have been asked about the incident and our reaction. We feel we owe it to each of you to be transparent and lend perspective about what happened on that fateful evening and the days following. Please know, in no way do we want to distract from Gavin and his memory but simply respond in a timely manner to many who are asking serious questions and seeking answers.

This is what we know to be true:

We, in the most sincere and humble manner possible, ask the Board be patient as members of law enforcement complete their investigation and determine how to assign accountability. As you can imagine, this is a terrible time. That said, we understand that the process is as important as the outcome.

Understandably, this unthinkable tragedy has created severe sadness in the greater Ocean Pines community. On behalf of our more than 400 caring and dedicated employees, we again convey our deepest sympathies to the Knupp family – our collective prayers remain. There is nothing more important than supporting the Knupp family during this time.

As always, if you or any member of the Board has any questions or needs clarification, please don’t hesitate to contact our leadership team.”