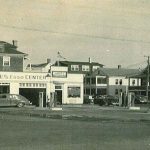 The gas station at the foot of the Route 50 Bridge was one of just a handful of local businesses to stay open year-round in the 1940s and 1950s.

William Dale started the business in 1941 but it was taken over by his wife Elizabeth after their marriage ended. She managed Dale’s Esso from 1943 to 1953 and pumped gas, checked oil and washed windshields in an era when that type of work was rarely attempted by a woman.

When Mrs. Dale’s health began to fail, she leased the station to Burton Birch. He successfully ran it for another 30 years until the building was demolished and the land developed to become an entry park.

To purchase one of Bunk Mann’s books, click over to www.vanishingoc.com.