OCEAN CITY — There were no shortage of heroes during last Sunday’s frenzied flurry of ocean rescues, including one local property owner and another man from Virginia who saved a young lady in distress off 140th Street.

On Sunday, an offshore storm churned up high surf and rip currents up and down the beach in Ocean City, resulting in as many as nine calls for swimmers in distress. With the Ocean City Beach Patrol not officially yet on duty for the season, the Ocean City Fire Department was busy all day with rescues and pivoted its deployments with a gator on the beach with rescue swimmers.

While the fire department did yeoman’s work all weekend, private citizens were also credited with a save. Around 3 p.m. last Sunday at the beach at 140th Street, an unidentified young lady was pulled out to see roughly 100 feet by strong rip currents and was calling for help, while dropping below the water’s surface. 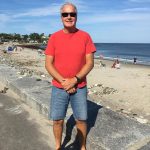 Local property owner and part-time resort resident John Wilkinson, Jr., 67, a former member of the Ocean City Beach Patrol in 1975, was alerted to the victim’s calls by his wife, Jane Wilkinson. Wilkinson entered the water and swam through the breaking waves to reach the victim.

Tyler Davila, 33, of Arlington, Va., saw the scene unfolding and followed Wilkinson into the water. Together, they reportedly grabbed the floundering victim by her right hand and began pulling her toward the shore. Another individual reportedly threw a boogie board to the rescuers.

After a few minutes of fighting the strong currents, Wilkinson, Davila and the victim reached the shallower water where bystanders were able to get the semiconscious victim and drag her safely onto the beach.

Davila’s girlfriend, Lidia Marino, of Washington, D.C., who is a physician’s assistant, was on the beach and helped the victim until firefighter-paramedics arrived. Ocean City Fire Department first-responders arrived almost immediately and rendered aid to the victim. After about 15 minutes on the beach, the young woman was able to walk on her own toward a waiting ambulance. All in all, a potential tragic drowning was averted by the quick response of Wilkinson, Davila, others on the beach and first-responders. There were many other unreported instances when surfers reportedly aided swimmers in trouble.