And while the corner location has been home to many businesses over the years – including Daisy’s Wheel House, Snappers and, most recently, the Lucky Anchor – operators Tony DiBuo and wife Wendy DiBuo and brother Billy Wilkins say Crawl Street is there to stay.

“Everyone told us not to do it, and that we couldn’t do it,” Billy said. “Apparently, they were wrong.”

Since 1964, the Wilkins family has owned and operated the Cork Bar, located two doors down from Crawl Street Tavern. But when 19 Wicomico Street became available earlier this year, the trio jumped at the opportunity to launch a new operation. 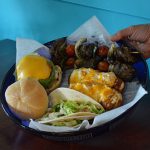 “That business always was an established business,” Wendy said of the Cork Bar. “This building has always been here, and we were 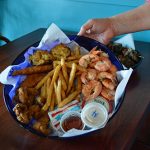 And for good reason, too, she added. Wendy noted the property was once owned by her great-great-grandmother, Maggy Gordon – the daughter of resort business pioneers Daniel and Margaret Trimper – and her son, Daniel Henry.

“He died very young but had one child, my grandmother, who was born upstairs,” she said.

For decades, Wendy and Billy’s grandparents owned and operated the California Hamburger concession stand from 19 Wicomico Street. And although the family sold the building years ago, Wendy said she had kept an eye on the property.

“My grandmother was born here, my dad and his sister lived here, and they rented out rooms,” she said. “I just felt like if it ever became available that our family would love to have it.”

On Feb. 12, Tony, Wendy and Billy acquired the keys to the property and quickly got to work cleaning, painting and organizing. And by mid-March, Crawl Street Tavern was open for business.

“Our parents, who will be married 57 years next week, have worked hard all of their lives, and been our role models,” Wendy added. “None of this would have been possible without them.”

The trio was also joined by Manager Mike Custis, Gabrielle Wilkins and Stephen Blackwell, and seasoned kitchen staffers Brandon Webster and Rob Moler, to name a few. But within days of opening, Crawl Street was forced to close in response to the COVID-19 pandemic.

Regardless, Tony said the team rallied. Beginning in May, for example, Crawl Street Tavern started offering carryout. And in June, the establishment set up outdoor seating.

“Considering they’ve had their hands tied behind their backs, they’ve done an unbelievable job,” he said.

“It’s been very exciting and challenging opening up a new bar and restaurant in the year 2020 and through the pandemic,” Wendy said.

“Our menu is affordable, and we have price points that everybody can afford,” Wendy said. “We wanted the average worker on the Boardwalk to afford to come in here and have a sandwich and a drink on their lunch hour or to come in a couple times a week to see a band.”

“The one thing he taught me that I’ve taken with me throughout my life is consistency,” she said. “You want to serve up a consistent product so that people know what they are getting when they come through the door … That’s what we wanted to do here.”

And although it couldn’t be implemented this year, the operators say it is their hope to offer morning coffee and free WiFi next year, particularly for J-1 students.

“At the Cork Bar, our motto is the Cork Bar is where everyone is a local,” Wendy said. “And we want them to feel local, to come in and have a muffin or coffee and then come back after work.”

Tony added that Crawl Street Tavern also plans to give back to the community.

Tony, Wendy and Bill encouraged everyone to come out and support their new establishment. Wendy noted Crawl Street Tavern now joins a long list of family-owned businesses on Wicomico Street, including the Cork Bar, the Bearded Clam, Dolle’s Candyland, the Atlantic Stand and Dumser’s Dairyland.