BERLIN –   The months-long restoration of an iconic Berlin business is finally nearing completion.

The Globe, which has been undergoing a massive renovation since being purchased by Burley Oak Brewing’s Bryan Brushmiller, is in the final stages of construction. Brushmiller hopes to welcome the public back to The Globe in July, pending the lifting of state restrictions.

“For the last six months we have been working diligently to bring back this 100-year-old theater to its former glory,” Brushmiller said. “We’re excited to show everyone a space that will host barbecue, craft beer and live entertainment.”

Brushmiller bought the property last fall and has spent the months since reimagining the interior of the historic building. Though the coronavirus pandemic has slowed the project somewhat, Brushmiller says it’s 80% complete. On a tour of the building this week, Brushmiller highlighted the changes to the structure. Those who frequented the restaurant in recent years will be surprised by the open floor plan, as Brushmiller has removed the wall enclosing the kitchen and expanded the bar. While the kitchen remains on the left side of the building, it’s visible to patrons, who will be able to sit in the back by the stage, outside in a new seating area, or at the bar — 50 feet of live edge maple built by Brushmiller’s father Tim. The second floor of The Globe will feature overflow seating and will, as it was in the past, be available for private parties. 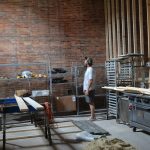 Preserving the original brick walls was a priority during the project, according to Brushmiller.

While finishing work is still underway, Brushmiller said The Globe’s interior would pay homage to its roots. A wood floor, steel paneling, exposed beams and brick walls will give the space a historic feel, according to Brushmiller.

He’s paid particular attention to the brick, as it fits in well with the historic downtown. Brushmiller said it took six days to remove the epoxy from all the brick behind the bar, which was then repointed and sealed.

“For me the historic preservation of the building is of the utmost importance,” he said.

Once the interior is finished, Brushmiller will add picnic style seating to fit with the fast casual barbecue menu he’s got planned. When The Globe opens, patrons will be able to walk in and sit at the bar or walk up to the kitchen counter and order their food. They’ll be given a number and told to sit wherever they like as their meal is prepared.

Brushmiller said he’d reconnected with former employee Aaron Miller, who has worked at The Buttery and Dogfish Head in the past, and that Miller would be overseeing his food operations.

The stage, which is located at the back of the restaurant, is now visible from the bar and will feature live entertainment regularly.

While COVID-19 closures impacted much of the economy this spring, Brushmiller said the situation gave his team more time to focus on their work at The Globe. The restoration project has also helped Brushmiller keep his staff employed, as bartenders unable to work at the brewery while it is closed are instead helping Brushmiller’s father with the restoration work.

“We love restoring old buildings,” he said. “I was super excited to work with my dad on another project.” 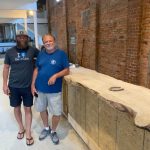 A new bar was constructed of live edge maple by Brushmiller’s father, Tim.

When asked about the cost of the project, Brushmiller said he estimated it at close to $250,000. Though the work has been extensive, he said he recognized the potential of the building the first time he ever visited it and was eager to reinvest in the town. The Globe will join a growing list of Brushmiller properties in Berlin, as Brushmiller and his family have created not only Burley Oak Brewing Co. but also Viking Tree Trading Co. and the Burley Café.

“I love this town,” Brushmiller said. “This town is awesome. I hope other people reinvest in the town, whether it’s taking time to pick up a piece of trash off the street or buying an old building to rehab.”