•  Stephen Decatur’s girls’ varsity lacrosse team regrouped after a sluggish first half and pulled away from host Calvert, 10-4, on Wednesday to win the state 3A-East Region title and remain unbeaten.

The Seahawks entered the state tournament as the top seed in the 3A-East Section I and cruised past visiting Kent Island, 17-6, in their tournament opener and advanced to face Calvert in the region championship. The two teams sparred for much of the first half with neither gaining an advantage. The score was tied at 2-2 at the break, but Decatur would get its offensive machine cranked up. The Seahawks outscored Calvert, 8-2, in the second half to cruise to the 10-4 win in the regional championship and remain unbeaten at 15-0 on the season. Payton VanKirk scored three goals and dished out an assist. Claire Porter had two goals and three assists, while Elle Bargar and Brigitte Ardis each scored two goals.

Worcester came out firing and went on an 8-0 run over a 15-minute stretch in the first half. The Sabres pulled closer at 8-3 with a run of its own with just around a minute left in the first. However, Worcester scored twice in the final 33 seconds of the half to extend the lead to 10-3. Amy Lizas scored on an assist by Sophie Brennan and Julie Talbert scored on an assist from Sarah Savage in the final minute of the half.

The Sabres scored the first three goals of the second half to cut the lead to 10-6. Brennan stopped the run with goal near the 16-minute mark to push the lead back to 11-6. Worcester then got goals from Caroline Lindsay, Molly Soule and Savage to extend the lead to 14-6 with 11 minutes left. Saints Peter and Paul made another late run and cut the lead to 14-9. A goal by Soule pushed it back to 15-9 and Brennan closed it out with an extra-man goal with just under two minutes left for the 16-9 win and the ESIAC title.

•  Stephen Decatur’s varsity baseball team ran out of gas this week and fell to fellow Bayside Conference rival Bennett, 5-3, in the state 3A South Section I title game. The Seahawks were the top seed in the sectional and earned a first-round bye. The game started well for the Seahawks, who led 3-1 after three innings, but in the top of the fourth, Bennett rallied for three runs to take the lead.

Decatur had at least two runners on in each of the final three innings, but couldn’t break through. In the fourth, Ryan Bennett drew a two-out walk and Brooks Holloway followed with a single, but the runners were stranded. In the bottom of the fifth, the first two batters reached after getting hit by pitches, but on a sacrifice bunt by the next batter, the Bennett pitcher got the force at third. Runners were stranded on first and second in the inning.

In the bottom of the sixth, Ryan Bennett was hit by a pitch with one out and Holloway followed with a single. Again, the runners were stranded on first and second. Bennett added an insurance run in the top of the seventh. In the bottom of the seventh, Justin Meekins started with a leadoff single and Tristan McDonough reached based on a misplayed pop-up to shallow left, but the runners were left stranded as Bennett celebrated.

• Worcester Prep’s girls’ varsity lacrosse team fell to old rival Saints Peter and Paul in the Eastern Shore Independent Athletic Conference championship game in the latest installment of one of the classic rivalries on the shore.

• Worcester Prep’s boys’ varsity lacrosse team capped off a remarkable season with a 16-5 win over Gunston in the ESIAC championship game. Playing at home in front of big crowd,
Worcester scored first on a goal by Ryan McGuire just 44 seconds into the game to take a 1-0 lead. About 25 seconds later, the Mallards’ Brad Regan scored Worcester’s second goal of the game and the rout was on. Worcester scored three more goals in the first quarter and led 12-0 at the half. With the outcome pretty much no longer in question, Worcester Coach Kevin Gates cleared the bench for much of the second half in the 16-5 win. Worcester’s record now stands at 14-1 with one game remaining.

• Worcester Prep’s girls’ varsity lacrosse team beat Gunston to advance to the ESIAC championship game. Worcester scored early and often on their way to the 20-3 win over the Herons in the conference 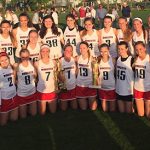 • Worcester Prep’s boys’ varsity lacrosse team beat Salisbury School, 11-5, to close out the regular season on a remarkable nine-game winning streak. Mike Heiderman, Chris Mancini and Mike Otway led the Mallards’ attack with three goals each. With the win, Worcester closed out the regular season with a 15-4 record including nine straight down the stretch. The nine-game win streak came after Worcester had a two-week layoff because of spring break and the annual senior trip. Following the win over Gunston in the finale, Otway was named MVP, the Coach’s Award went to Mancini and Brad Martelo was named Most Improved.

• Ocean City’s offshore fishing season officially got underway this week with the first mako shark of the season. The May 9 date for the first mako of the season was one of the earliest in recent memory. Angler A.J. Thomas finishing aboard the MoJo with Captain Joe O’Boyle caught the 246-pounder about 30 miles offshore near the Jackspot.