Despite unprecedented success in recent years, standing in the Seahawks’ way has almost always been Queen Anne’s. Decatur lost in the Bayside title game the year prior to the Lions, who collected their fourth straight conference title. This week, the two teams met again in a game that had a playoff feel and this time it was the Seahawks exacting a little revenge with a thrilling 11-10 overtime victory.

Queen Anne’s tied the game at 10-10 in the second overtime period, setting up the dramatic conclusion. With less than a minute remaining in the second overtime period, Decatur’s Elle Bargar scored a free position goal to put the Seahawks ahead 11-10. Queen Anne’s wasn’t quite done yet and appeared to score a tying goal with time running down, but the goal was waved off by a crease violation. 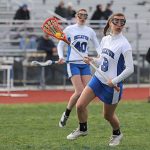 The Seahawks were able to hold onto the ball for the remaining 30 seconds to clinch the victory over their old nemesis, touching off a wild celebration. Yesko led the Decatur attack with four goals and an assist, while Payton VanKirk scored three goals and dished out three assists. Jillian Petito was outstanding in goal with 16 saves including two huge ones in overtime.

Three days later, Decatur was back in action at home against Cape and took care of business, 15-9, to improve to 7-0 on the season. Yesko led the way with five goals and three assists, while Payton VanKirk scored four goals. Victoria Kerkovich scored three goals, all in the second half, while Claire Porter scored a goal and dished out an assist. Petito turned in another strong performance with 10 saves.

The Mallards’ record now stands at 6-1, their only loss coming to D.C. area power Bullis back on March 28. Worcester scored early and often against the Herons on the road last Friday and cruised to the 18-3 win. Sam Cantello led the scoring barrage with five goals and three assists, while Wyatt Richins scored three times and dished out six assists. Tucker Brown scored four goals and two assists, while Pat Petrara scored two goals. Ross Dickerson was very active as usual, winning 19 faceoffs and grabbing 20 ground balls. 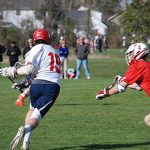 This week five years ago, Worcester Prep’s Tucker Brown moves the ball against the Bennett defense in the Mallards’ win over the Clippers.
Photo by Shawn Soper

• Stephen Decatur’s varsity baseball team ran into a buzz saw this week, falling to rival Parkside, 5-1, for their first loss of the season.

With a playoff atmosphere, several big-league scouts in attendance and a big bipartisan crowd on hand, the second game in the season series between the Seahawks and the Rams certainly lived up to the hype. The teams have now split two games this season with a Seahawks rallying for a 4-3 win in the first game in early April. Decatur and Parkside are now tied atop the Bayside South with each team with just one loss.

• Worcester Prep’s girls’ varsity lacrosse team ended a mini two-game losing skid with a 17-7 rout of visiting Sussex Tech. After falling to old rival Saints Peter and Paul and a double-overtime loss to Tower Hill, the Mallards vented their frustration on Sussex Tech with an easy win over the Ravens. Molly Dickerson and Sara Noyes led Worcester with three goals each.

• Worcester Prep’s boys’ varsity lacrosse team pulled away from Sussex Tech for a convincing 15-4. The Ravens hung with Worcester through much of the first half before the Mallards pulled away. Alex Ternahan led Worcester with four goals, while Justin Butler, Brad Harris and Jake Emche each scored three goals.

• Decatur’s girls’ varsity lacrosse team left nothing to chance against North Caroline, jumping out to an early lead and cruising to a 20-2 win over the Bulldogs. Leigh Anne Flounlacker continued her season-long assault on the opponents’ net, scoring four goals to lead all Decatur scorers. Lexi Nathan and Bethany Howe also made big contributions, scoring three goals each. The win improved Decatur’s record to 6-1, just one game behind rival Parkside (7-0) in the Bayside South standings. Parkside handed the Seahawks their only conference loss this season with a 9-8 win back on March 31.

• Stephen Decatur’s boys’ varsity lacrosse team’s see-saw season continued this week with an 18-1 pasting of visiting North Caroline. The up-and-down Seahawks thrashed the Bulldogs, 18-1, with a stingy defense that allowed a single goal, and a balanced scoring attack that saw several players get into the scorebook. Nick Abbaticchio and Brendan Wagner led Decatur with three goals each, while Brandon Terlizzi and Johnny Moore pitched in two each. The win continued a season-long pattern of highs and lows for Decatur, whose record now stands at 4-3. In its last three games before beating North Caroline, the Seahawks edged Bennett, 11-0, crushed Wicomico, 14-0, and lost to Queen Anne’s, 15-5.

• First thunder and lightning rolled, then Worcester Prep rolled to a decisive 12-6 win over neighborhood rival Stephen Decatur in an instant classic in the long-standing rivalry. The two local teams met at Decatur on Good Friday in a game interrupted for almost an hour because of a thunderstorm. The game essentially was broken down into a pre-storm period dominated by Decatur and a post-storm period dominated by Worcester.

Decatur scored first on a goal by Will Mumford and Worcester answered quickly with a goal by Trip Dyer. The Seahawks scored again a minute later on a goal by T.J. Carven and it was 2-1 Decatur after just two minutes. Things settled down after that early flurry, but Decatur got it cranked up in the second quarter to pull ahead, 5-1, on goals by Brian Harrison and Kyle Purcell.

Worcester battled back before the half and cut the lead to 6-4 on goals by Chris Mancini, Mike Otway and Mike Heiderman. At the start of the third quarter, the skies that had been threatening all afternoon opened up with a fierce thunderstorm and the game was delayed for nearly an hour. When play resumed, the third quarter belonged to Mancini, who scored three more goals in the period and ended the game with five goals total. During the decisive second half after the storm abated, Worcester also got big goals from Heiderman, Tosh Tryon and Marco Calcera, turning a Good Friday into a great Friday for the Mallards.