•Worcester Prep’s boys’ varsity lacrosse team edged Bennett, 9-7, to improve to 4-1 on the season. The Mallards won the game against a Bayside South team behind a balanced attack that saw several players get into the scorebook.

Sam Cantello led the way with four goals and two assists, while Wyatt Richins scored three goals and added three assists. Tucker Brown and Patrick Petrera each scored single goals and added single assists. Ross Dickerson won 14 faceoffs and grabbed nine ground balls while Wade Walter was outstanding in the net, recording 20 saves. The win over Bennett completed a solid week for the Worcester boys, who beat Tower Hill days earlier. In that contest, Cantello scored four times, while Richins and Brown each scored twice. With the pair of wins, the Mallards improved to 4-1 on the season.

•Stephen Decatur’s varsity baseball team remained unbeaten in the season with an easy 10-0 win over Wicomico. Zero was the number that defined the Seahawks’ early season that year. Decatur won its first six games, all but shutout, including the 10-0 over the Indians this week. The streak also included a 11-0 win over Mardela, a 10-0 win over Crisfield and an 8-0 win over Snow Hill.

•Worcester Prep’s girls’ varsity lacrosse team swept a pair of games over Tower Hill and Bennett to improve to 7-1 on the season. Early in the week, the Mallards beat Tower Hill, 17-12, in a high-scoring game. Leigh Lingo and Sophie Brennan led the scoring with four goals each, while Molly Soule added three. Karlie Southcomb, Cecily Sass and Caroline Lindsay each scored two goals and Grace Tunis dished out three assists.

Later in the week, Worcester beat Bennett, 16-7 after jumping out to a big early lead. Soule scored three goals, while Brennan added two. Also getting in the scorebook were Southcomb, Melissa Laws, Leigh Lingo, Olivia Bescak and Marissa Grosso.

•On a picture-perfect Easter Saturday afternoon, Worcester Prep’s girls’ varsity lacrosse team edged Decatur, 12-11, in another instant classic in the rivalry between the crosstown neighborhood rivals.

The two teams faced off against each other in the first of two games in a holiday invitational tournament hosted by Worcester. The game was played first on a rare Saturday morning to ensure the neighborhood rivals would face each other and keep the long-running fierce but friendly series going. The game went back and forth all morning with neither team getting more than a one-goal lead over the other. In the end, the Worcester girls prevailed, 12-11, in the tightest contest between the two rivals in recent years.

Molly Dickerson and Mary Hudson led Worcester with three goals each while Skylar Seigfried had a strong game in net for the Mallards with eight saves. Worcester’s win over 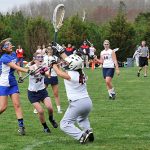 Worcester Prep goalie Skylar Seigfried comes out of the net to make a big save against Decatur this week 10 years ago. The Mallards edged the Seahawks, 12-11, in another classic in the long-running crosstown rivalry.
Photo by Shawn Soper

Decatur in 2010 was the first in four years for the Mallards. In the early years, Worcester dominated the backyard rivalry with a long-established program while Decatur began a competitive varsity program much later. 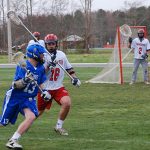 •Worcester Prep’s boys’ varsity lacrosse team cruised past neighborhood rival Decatur, 13-4, during a holiday invitational tournament in Berlin. It’s always special when Worcester and Decatur face off in lacrosse and the series produced several classics over the years. In 2010, however, the deep and experienced Mallards had little trouble with a young Seahawk team and cruised to the 13-4 win.

Justin Butler led Worcester with three goals, while Hunter Marshall added two goals and an assist. Despite the lop-sided final score, the game, as always, featured a lot of great shots, big hits and a ton of penalties in front of the big bipartisan crowd at Worcester. Most of the players competed together on youth and travel teams and there was no shortage of familiarity.

•Stephen Decatur’s varsity baseball team routed Mardela, 14-0. Brad Stiles was dominating on the mound, striking out eight Warriors in a game shortened to five innings because of the score. James Rossi collected four hits and drove in two runs, while Troy Bennett, Chris Bunting and Grady Anderson each had two hits.

•Stephen Decatur’s boys’ varsity lacrosse team routed visiting Wicomico, 11-7, behind a five-goal performance by T.J. Carven. Carven got Decatur on the board just one minute into the contest, but Wicomico tied it at 1-1 a short time later. That was a close as the Indians would get, however, as the Seahawks went on a big-first quarter roll to pull away.

Decatur got goals from Brian Harrison, Brandon Altvator and Kyle Purcell during the first quarter, but the period belonged to Carven, who scored three goals and added an assist in the first period alone on his way to a five-goal performance. Decatur goalie John Apple was outstanding all afternoon, recording several point-blank saves. Apple was supported by the Seahawks vaunted defense led by Clifton Rogers and Brandon Pichieirri. The game was close for a while until Carven’s outburst and it became a little chippy between the Bayside South rivals with numerous penalties called before the Seahawks pulled away.

•Worcester Prep’s boys’ varsity lacrosse team suffered its first loss of the season, falling to Caesar Rodney, 4-3, in a low-scoring game. The Mallards were led by Mike Otway, who scored two goals, and Colby Schneider, who added a single tally. With the loss, the Worcester boys fell to 5-1 on the season with important showdowns with conference rival Salisbury School and Delaware powerhouse Cape Henlopen looming in the following week.

•Lighthouse Sound announced plans for its grand opening later in April 2000 including an inaugural fundraising golf tournament to benefit Coastal Hospice. The golf club and expansive restaurant and country club complex had recently been completed and the grand opening including the golf tournament was planned to open the facility in style for a worthy cause. Incidentally, Coastal Hospice was chosen as the beneficiary of the fundraising golf tournament because it was marking its own 20-year anniversary of providing dedicated services to patients and their families suffering from terminal illness on the Lower Shore.