ASSATEAGUE — Amid the gloom and anxiety of the continuing pandemic, a little hope and a positive ray of sunshine appeared in the form of a new foal born on Assateague this week.

Images of the new foal, known for now only as NSBHS-AIOS, were captured by intrepid photographers on the barrier island on Tuesday. The mare is Mieke’s Noe’lani and the suspected sire is Mr. Frisky Hooves although no other official details have yet emerged. In any case, the parents were seen on Assateague taking good care of the new addition.

In the 1970s, the National Park Service began assigning alpha-numeric names to new foals on the island to better track their lineage as well as identify to which sub-herd they belong and the areas of the island they tend to frequent. The new foal born this week will later be given a proper name through one of the various naming rights auctions or other contests.

With the addition of the new foal born this week, the population of wild horses on the Maryland side of Assateague now stands at 76, or just below the ideal range of 80-100. The population had dipped to 75 late last year due to a variety of factors including old age, illness, injury and even some man-made causes such as horses being struck by vehicles in the developed areas. 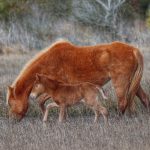 Each fall, Assateague Island National Seashore biologists conduct pregnancy tests on the mares among the population in an attempt to predict how many new foals are expected to join the herd in the coming year although the results of those tests are not known. The pregnancy testing last fall targeted 36 mares between the ages of two and 24 out of the total population of 53 mares on the island. The new foal birthed this week is believed to be the first of 2020.

Despite the temptation to visit and take pictures of the new foal, especially under the current situation, National Park Service officials are reminding residents and visitors everything is new to the foal and are reminded to keep a safe distance from the mare and her offspring. As a rule of thumb, a safe distance is defined as around 40 feet, or roughly the length of a school bus.

That distance is recommended for all of the wild horses on Assateague. However, because the foal is so young, the school bus rule is particularly encouraged. The new foal will learn to interact with the environment on the barrier island from other members of the band. During that time, a mare will be very protective of her foal and it is vitally important for their well-being that residents and visitors give them plenty of space.