WEST OCEAN CITY — For the second year in row, Pickles Pub took first place and best in show in the 22nd annual Hots for Tots Chili Cook-Off at the Greene Turtle in West Ocean City on Sunday, but the real winner was the local community and its typical generosity. 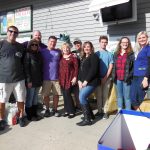 For the record, Pickles Pub repeated as first-place winners at the Hots for Tots Chili Cook-Off at the Greene Turtle in West Ocean City on Sunday and also won best in show for its display and set-up. Ocean’s 13 took second place and the Lazy River Saloon finished third in the ballots collected from the hundreds on hand who sampled chili offered by all of the contestants.

Hosted by HergGroup Horizon and the Greene Turtle West staff, the 22nd annual event raised over $2,000 along with a mountain of unwrapped toys collected for the Toys for Tots program. Attendees were asked to make a $10 donation at the door or bring an unwrapped toy. In addition, the event included a One Warm Coat donation sponsored by the local Absolut Vodka distributor, during which dozens of new or gently used coats were collected.