WEST OCEAN CITY — An 18-year-old Delaware man faces a slew of charges this week after driving his vehicle through the front doors of a closed West Ocean City business and walking away with a 12-pack of beer before driving away and being caught a short time later.

Sometime around 1 a.m. Saturday, Luis Alcantara, 18, of Bridgeville, Del., drove his vehicle through the front doors of the West-O Bottle Shop and Bar on Route 50 in West Ocean City after the business had been closed for the night. The business’s surveillance video revealed Alcantara headed straight for the walk-in beer cooler and took a 12-pack of beer before returning to his vehicle, backing out and leaving the scene.

His vehicle was located a short time later behind a West Ocean City doctor’s office and he was taken into custody. Alcantara has been charged with burglary, theft and malicious destruction of property. Following a bail review hearing on Monday, Alcantara was ordered to be held without bond. A preliminary hearing has been set for Sept. 24. 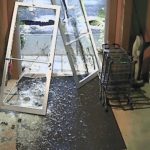 A surveillance photo from inside the West-O Bottle Shop shows where the vehicle drove through the establishment. Submitted Photo

The business owner said the incident was bizarre for a lot of reasons, not the least of which was the suspect’s goal in the drive-through burglary — a 12-pack of beer. She said the suspect did not attempt to open the cash register, nor did he target any of the expensive wines, liquors and other inventory on the shelves.

The business owner also said despite the inconvenience of the bizarre break-in, the situation could have been much worse if not for Alcantara’s precision driving. The suspect drove straight through the glass double-doors of the establishment and did not hit the brick-and-mortar elements, causing no significant damage to the building, which is structurally sound. Temporary doors are in place and the business remains open even on the very next day after the early morning incident on Friday.

Despite the hardship and inconvenience of the situation, the business owners have not lost their collective sense of humor following the incident last weekend. A social media post following the incident reads “Our tagline at the Bottle Shop is ‘come on in my thirst friends.’ To clarify, we would prefer for the public to limit this to hours that the store is open. We will gladly carry items to your car. No need to drive it in.”

The post added, “Thank you to the Maryland State Police Berlin Barrack for immediately responding to the alarms at our property, for quickly finding and apprehending the individual and for your continued diligence in protecting our community.”