OCEAN CITY — With three days of the 2019 White Marlin Open in the books, there is much drama yet to unfold, but it appears the tournament record for white marlin releases will likely be shattered.

The 2019 event has been unique for how the boat-fishing days have been expended. There are 404 boats registered in this year’s tournament, each with three fishing days, for a total of 1,212 “boat days.” A world-record $6.1 million in prize money is up for grabs in the 46th edition of the tournament. Historically, most participating boats fish Monday and that was the case this week when 389 went out. 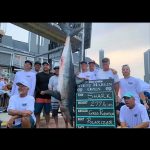 One of the other highlights from the first day of fishing was a 277-pound shark caught by the Polarizer. Photos courtesy of Fish In OC/Hooked On OC

Typically, most boats take a lay day on Tuesday, then pick two of the remaining three days depending on weather, sea conditions and the leaderboard. However, because the white marlin bite has been red hot, another 355 went out on Tuesday. Toughly two-thirds of the boat days were expended in just the first two days.

On Wednesday, just 122 boats went out and another 103 went out on Thursday, leaving 243 boats with one more chance on Friday to erase and rewrite the leaderboard.

Driving the early expenditure of boat days has been the red hot white marlin bite. The tournament prides itself on conservation and remarkable catch-and-release rates and that has been the case again thus far this year. There has been no shortage of white marlin releases, but most have been too short or too light to qualify.

In 2016, when prevailing conditions and water temperatures were similar to this y 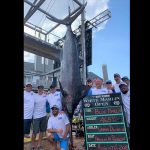 There were lots of cheers when this 465.5-pound blue marlin, caught by the Haulin N Ballin team, was hoisted to the weigh station.

As if the WMO doesn’t produce enough drama on it own, adding to the hype this year is the participation of NBA legend Michael Jordan. In the weeks leading up to this year’s WMO, it became known Jordan’s 80-foot Viking, aptly named Catch 23, was registered for the tournament, but it remained uncertain if the basketball superstar would participate.

Those questions were answered this week when Jordan’s private plane arrived at the Salisbury airport and the NBA legend was spotted around Sunset Marina where the Catch 23 was docked. On Wednesday, Jordan got in the action with a white marlin release around 9:44 a.m. on the Catch 23, according to WMO fishing reports.

After three days of active fishing, the Chasin’ Tails sat atop the white marlin leaderboard with a 74-pounder potentially worth $1.45 million. The Backlash, which won the tournament recently, sat in second with a 73.5-pound white marlin worth an estimated $1.5 million, while the Cricket was in third with a 71-pound white worth $89,000.

The lone blue marlin on the board is a 465.5-pounder caught by the Haulin N Ballin on Tuesday, which was potentially worth $740,000 through Wednesday. There was another blue marlin brought to the scale on Wednesday, but it fell just short of the minimum length and not weighed.

The Natural sat atop the wahoo leaderboard through Wednesday with an 82-pounder worth an estimated $18,000, while the Keepin It Reel was second with a 61.5-pounder also worth $18,000. A pair of 54.5-pound wahoos from the Caneelin and the Night Hawk III shared third place in the division.

In the dolphin division, the Game Changer sat in first with a 35.5-pounder, while the Viking 72 was in second, the Ditch Digger II was in third, the Right Hook was in fourth and the Hellsea was in fifth. The lone shark weighed at the scale through Wednesday is a 277-pounder caught by the Polarizer worth an estimated $225,000.