OCEAN CITY — A 27-year-old Mechanicsville, Md. man lost his life Tuesday night after his motorcycle traveling at a high rate of speed collided with a vehicle attempting to make a U-turn on Coastal Highway.

Around 9:44 p.m. on Tuesday, Ocean City Communications received a call regarding a serious motor vehicle collision on northbound Coastal Highway at 59th Street. The preliminary investigation revealed a motorcycle operated by Brian Douglas II, 27, of St. Mary’s County, was heading north at a high rate of speed when it ran through a red light and collided with a Ford Explorer attempting to make a U-turn onto northbound Coastal Highway.

Douglas was declared deceased at the scene while the occupants of the Ford Explorer were not physically injured. According to an Ocean City Police Department release, OCPD officers attempted to stop the motorcycle at 45th Street a few minutes earlier, but the motorcycle did not stop and fled from police northbound on Coastal Highway.

According to police reports, OCPD officers did not pursue the motorcycle and lost sight of Douglas and his motorcycle as it sped north on Coastal Highway. A video obtained by The Dispatch confirms no police officers pursuing Douglas just before the collision for several blocks.

The video also shows traffic on Coastal Highway in both the northbound and southbound lanes was remarkably light for late July with hardly any vehicles traveling in either direction, which could have contributed to the collision. If traffic had been heavier, the motorcycle likely would not have been able to reach the speed it did before the collision.

Local resident George Grimm was a witness to the collision and the events leading up to it. Grimm, a motorcycle enthusiast himself, said this week he was sitting in his vehicle at the light at 56th Street when the motorcycle came flying up from the rear on northbound Coastal Highway.

“I was sitting at the light with my windows down and heard this ungodly loud motorcycle sound,” he said. “It sounded like a hundred of them.”

Grimm said he was in the right lane closest to the bus lane when Douglas’ motorcycle stopped next to him in the middle lane.

“He pulled up next to me and was revving the motorcycle so loud I had to put my windows up, and I’m a Harley guy,” he said. “Then he looks over at me grinning from ear to ear and points at me like he knows me. As a motorcycle guy, I yell to him over the noise, ‘ride safe man.’” 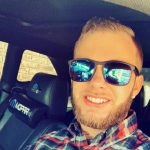 “I can’t believe how fast the guy took off after that,” he said. “The OCPD officer turned off his lights and followed, but I don’t think the officer ever even went over the speed limit. A couple of seconds later it was all over. I was the last face that poor guy ever saw on this earth.”

Grimm said what was almost equally shocking was the quick response of Ocean City’s first responders.

“The first responders were there in what seemed like 10 or 15 seconds,” he said. “It was unbelievable how quickly they got there and immediately began working on the victim and how coordinated it all was.”

The northbound lanes of Coastal Highway were closed for several hours following the collision with just one lane open on the southbound side. Ocean City Public Works established an amended traffic pattern around the scene of the collision. As of Thursday morning, the OCPD’s Traffic Safety Unit was still investigating the collision