OCEAN CITY — A tragedy was averted on Tuesday evening when the pilot of a small plane flying over the resort coast experienced engine trouble and safely belly-flopped the aircraft in the ocean.

Around 6:15 p.m. on Tuesday, a single-engine 1981 Cessna 172 RG crashed into the ocean about a quarter mile from shore at 21st Street. The pilot and lone occupant, identified as Trevor Deihl, 23, of Reedville, Va., was able to get out of the aircraft and was not seriously injured. He was assessed at the scene by Ocean City EMS immediately following the crash and it was determined he did not need to be transported to the hospital.

Deihl told investigators he had taken off from Reedville, Va. and had planned to land at the Ocean City Municipal Airport. Deihl said he was about one mile offshore when the aircraft began having engine trouble and he was ultimately able to glide the plane into the ocean about a quarter mile from shore.

A video of the crash shows the plane maintaining a horizontal position as it glided into the ocean before nose-diving into the water. It is uncertain just when Deihl was able to get out of the downed aircraft, but he was successfully able to glide it into the water just offshore in front of a crowded Ocean City beach in mid-July. Had the incident occurred much earlier, there likely would have been numerous swimmers and bathers in the ocean in that area.

Personnel from the Ocean City Beach Patrol, the Ocean City Police Department and the Ocean City Fire Department (OCFD) responded immediately to the scene. Deihl was assessed by OCFD paramedics and it was determined he was not seriously injured. Members of the OCFD dive team stabilized the downed aircraft, which had floated into the shoreline.

Waves pounded the vessel as it came to rest in the shore break, causing further damage. The plane was ultimately dragged onto the beach and later removed.

Maryland State Police responded after being notified of the incident by the OCPD. In addition, officials from the Maryland Natural Resources Police, the Coast Guard, the National Transportation Safety Board and the Federal Aviation Administration were also notified and responded to the scene. The investigation is ongoing.

In a message to his new charges, OCFD Chief Richard Bowers praised the pilot for his quick action in putting the failing plane safely down in the ocean.

“There was only a pilot operator and no others on board,” he said. “The pilot landed the aircraft into the ocean and did a remarkable job of negotiating the plane by missing people on the beach.” 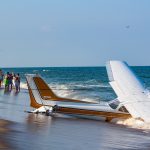 Bowers described the OCFD’s immediate response to the incident.

“Personnel assessed the pilot and began an immediate search to make sure there were no other patients and then stabilized the plane as waves crashed into the aircraft,” he said. “A fuel leak was contained and eventually the plane was safely removed from the beach.”

“I applaud the personnel and the entire operation at this significant incident,” he said. “As with any challenging incident, the basics were executed perfectly by the personnel and that made a huge difference in incident operations. We will review the incident and look at what went right and any possible areas for improvements.”

Finally, Bowers thanked his crews for their execution during the incident in difficult circumstances.

“I appreciate the hard work and efforts by everyone under extreme heat and humid conditions,” he said. “Everyone needs to hydrate, hydrate and hydrate prior to, during and after your shift or duty crew assignment. We will continue to focus on executing the basics perfectly and train, train, train. Being prepared is everything.”