WHALEYVILLE — Local law enforcement officials on Monday are still looking for two suspects involved in a home invasion in Whaleyville on Friday that resulted in injuries to the homeowner.

Sometime between 10:30 a.m. and 11:15 a.m. on Friday, a home on Whaleyville Road was burglarized. During the home invasion, the homeowner was injured and subsequently transported to Peninsula Regional Medical Center where he was listed in stable condition. 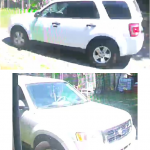 The Worcester County Bureau of Investigation (WCBI) was called to investigate and was able to obtain video surveillance footing depicting what appeared to be two males leaving the scene in an older model white Ford Escape SUV. WCBI is currently seeking the public’s help in identifying the suspects and the vehicle.

Anyone with information is urged to contact WCBI Detective Collins at 410-632-1111. Callers can also remain anonymous by contacting Crime Solvers of the Lower Shore at 410-548-1776.