ASSATEAGUE — The second of four expected new foals was born into the herd of wild horses last weekend, continuing a veritable baby boom on the barrier island.

Early last Saturday morning, the popular mare Gokey GoGo Bones gave birth to a chestnut foal and the mother and daughter appear to be thriving thus far on the barrier island. The new foal, known for now only as N2BHS-A, and the band into which she was born live most of the year in the highly developed areas and campgrounds.

In the 1970s, the National Park Service began assigning alpha-numeric names to new foals on the island to better track their lineage as well as identify to which sub-herd they belong and the areas of the island they tend to frequent. The new foal born last Saturday will later be given a proper name through one of the various naming rights auctions or other contests.

The new foal born last Saturday is one of four expected this year. Each fall, Assateague Island National Seashore officials conduct pregnancy tests on the eligible mares in the herd to predict how many new foals are expected in a given year. This year, the scientific tests predicted four new foals this year.

Last Saturday’s addition was the second of those four, although the tests aren’t infallible, and that number could change. The first was born in late December as a rare holiday season surprise. Most new foals on Assateague are born during the months of April, May and June although it is not unusual for a foal to be born during any month of the year.

Last weekend’s addition brings the total estimated wild horse population on Assateague to 77, which is just under the ideal range of 80-100. With at least two more foals expected this year, the total should inch closer to the low end of the ideal range.

The popular horses on Assateague are wild animals and generally left to the whims of nature. However, in the interest of maintaining a healthy population size, the National Park Service several years ago began a contraceptive program for the mares. In almost each year since, selected mares have been injected, or darted more appropriately, with a non-invasive contraceptive called PZP in an effort to maintain the size of the herd on the Maryland side in its manageable threshold.

After years of trending above the ideal population range, a combination of natural losses, attrition, old age and some accidents has brought the number of wild horses on the barrier island down to the low end. As a result, in recent years National Park Service staffers have moved from a reduction strategy with the contraceptive program to an adaptive management strategy. For example, no mares were darted with the contraceptive last year, which is likely why four new foals are expected. 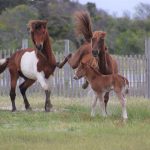 On the cusp of a busy new summer season, the birth of the new foal serves as a good reminder to residents and visitors to always give the young family plenty of space. Everything is new to the new foal, which is learning to interact with her mother and other members of her band. A mare will be very protective of her new foal and it is vitally important for their well-being that visitors and residents give them plenty of space in the formative weeks and even months.

Despite the temptation to take pictures and get a closer look at the new foal, the Assateague Island Alliance (AIA), the friends group of the Assateague Island National Seashore, is reminding residents and visitor the law is to stay about 40 feet away from the wild horses when they move into the developed areas, or about the length of a typical school bus.