ASSATEAGUE — In a mid-winter surprise, a new foal was born to the herd of wild horses on Assateague Island last week.

A bay pinto filly known for the time being as N2BHS-MR was birthed by Susi Sole last week on the barrier island. It was the first foal birthed by Susi Sole, also known as N2BHS-M. In the 1970s, the National Park Service began assigning alpha-numeric names to the wild horses on Assateague to better track their lineage as well as identify to which sub-herd they belong and the areas of the island they tend to frequent.

The birth of the new pinto filly last week came somewhat as a surprise. Each November, Assateague Island National Seashore biologists conduct pregnancy tests on the mares among the population of wild horses on the barrier island in an attempt to predict how many if any new foals are expected to join the herd in the coming year. 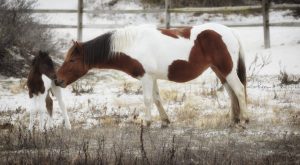 However, the pregnancy testing is not infallible and once in a while there are surprise births on the island. Such was the case last week with the birth of Susi Sole’s new foal. The time of year for the birth of the new foal is somewhat of an anomaly as well.  Since 1990, most foals born to the wild herd on the Maryland side of Assateague Island have arrived in April, May and June.

Nonetheless, there should be no concern about the health and survival of the new foal despite its arrival in the midst of one of the coldest stretches of weather thus far this winter in the mid-Atlantic area. The wild horses on Assateague are well adapted to the often-harsh conditions on the barrier island in the winter and the new mom and foal are expected to thrive despite the conditions.

While it is the middle of winter, the birth of the new foal serves as a good reminder to residents and visitors to always give the young family plenty of space. Despite the temptation to take pictures and get a closer look at the new foal, the Assateague Island Alliance (AIA), the friends group of the Assateague Island National Seashore, reminds residents and visitors the law is to stay about 40 feet away from the wild horses when they move into the developed areas, or about the length of a typical school bus.

With the birth of the new foal, the size of the wild horse population on the Maryland side of Assateague Island is now at 80, or just on the front edge of the ideal range of 80 to 100. Three foals were born last year, but there were also some losses in the population due to vehicle collisions, old age and just attrition.