WEST OCEAN CITY — The investigation involving the execution of a search and seizure warrant at residences in West Ocean City early Thursday morning is still active, but a few more details have trickled out Thursday. 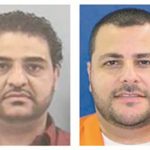 A U.S. Immigration and Customs Enforcement (ICE) spokesperson on Thursday afternoon confirmed federal ICE and Homeland Security (HSI) officials, assisted by other federal and local law enforcement partners on Thursday morning, executed a search and seizure warrant in the Ocean City area as a result of a federal indictment being issued. The residences at which the search and seizure warrant was served is located in the Oyster Harbor community in West Ocean City.

A similar raid was conducted at the same residences in 2013 and resulted in the indictment and eventual conviction of two local men — Basel Ramadan and Samer Ramadan — in a vast cigarette smuggling and money laundering operation. In 2015, Basel Ramadan, who was deemed the ringleader of the operation, was found guilty on all 198 counts against him including enterprise corruption, money laundering and numerous tax crimes.

Ramadan was accused of running a multi-state, multi-million-dollar cigarette smuggling scheme that originated at a wholesaler in Virginia, passed through the defendant’s businesses and residences in Ocean City, West Ocean City and Delaware and ultimately flooded over a million cartons of untaxed cigarettes into New York City and upstate New York.

In New York Supreme Court in October 2015, Ramadan was sentenced to four to 12 years and was ordered to forfeit $1.2 million in assets related to the crimes for which he was found guilty.