OCEAN CITY — Over 150 teams and thousands of players, coaches, family members and fans gathered on the beach at Caroline Street on Monday afternoon for the opening ceremonies of the third leg of the U.S. Specialty Sports Association (USSSA) Eastern World Series.

Over the last three weeks, nearly 6,000 softball players from all over the country and beyond have competed in the USSSA Eastern World Series with the final leg of the tournament, the largest of its kind in the country, getting under way this week. On Monday afternoon, the last 150 teams to compete in the three-weekend event gathered on the beach downtown for a parade up the Boardwalk and across the Caroline Street stage before settling in for the opening ceremonies.

Over the last three weeks, the USSSA Eastern World Series has drawn over 400 teams from 15 states and Canada to the Worcester-Wicomico region including Ocean City over the three-week life of the tournament. The event generates an estimated $19 million in economic impact and hotel room-night demand in excess of 10,000. 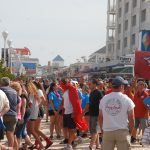 The 2018 event is once again billed under the Mid-Atlantic Amateur Sports Alliance (MAASA), partnership formed in 2014 between Wicomico and Worcester Counties and the town of Ocean City. The partnership is the first of its kind in the nation and leverages the combined assets of each jurisdiction in order to attract, retain and build sports marketing events. For example, while Wicomico and Worcester have the athletic facilities to handle the events, the town of Ocean City has the hotel rooms and other amenities to accommodate the players, coaches, families, friends and fans.