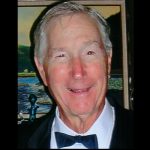 Mr. Kirby was a graduate of Loyola High School-Blakefield, and Loyola University, in Towson, Md., and the Wharton Business School in Philadelphia, Pa. He served in the United States Army at the time of the Korean War, and later was employed by Baker Watts as a stock broker. After retiring to Ocean Pines, he became a member of St. John Neumann Catholic Church. He sang in the choir (a Russian Bass) and served as Extraordinary minister of Holy Communion at St. John’s as well as St. Patrick’s Church in Palm Beach Gardens, Fla. He was a member of the Dunes Club, the Marlin Club, the Ancient Order of Hibernians, Delmarva Irish American Club, Ballenisles Golf and Country Club and Ocean Pines Golf and Yacht Club. He enjoyed tennis, bridge and was a huge sports fan, including the Ravens, Orioles and University of Maryland teams to name a few. In his spare time he prepared lunch for the Joseph House, and visited with the homeless at the Shepherd’s Crook at St. Paul’s By-the-Sea Episcopal Church in Ocean City. While visiting New York City, he sang “Happy Birthday with his tour group, at the Metropolitan – and wanted it to be known to all that he “sang at the Met.”

A mass of Christian Burial was held on Wednesday, Sept. 27 at St. John Neumann Catholic Church near Berlin. Interment was in Dulaney Valley Memorial Gardens in Timonium. A donation in his memory may be made to Coastal Hospice, P.O. Box 1733, Salisbury, Md. 21804, or Loyola High School, Development Center, P.O. Box 6819, Baltimore, Md. 21285-6819. Letters of condolence may be sent via www.burbagefuneralhome.com. Arrangements are in the care of the Burbage Funeral Home in Berlin. 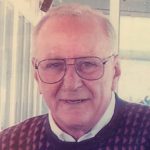 Born in Baltimore on Jan. 30, 1937, he was the son of the late James and Josephine O’Hara, also of Baltimore. Jim attended Valley Forge Military Academy of Pennyslvania where he excelled as a student and a leader. During his tenure, he was promoted to Regimental Commander in charge of the entire Corp of Cadets.

Jim was an avid golfer. In 1968, he won the Maryland State Amateur Golf Championship. Also, Jim won the men’s championship at the Country Club of Maryland in 1967, 1970 and also in 1972. He was also a golf instructor and was praised by students for being so kind and patient.

Jim is survived by his brother, Michael P. O’Hara, and his three identical triplet nephews, Ronald, Robert and George.