The “Berlin Small Town ThrowDown,” sponsored by Fager’s Island and The Atlantic Hotel, is bringing a touch of country flair to the streets next Saturday.

Event organizer John Fager said he and his wife, Michelle, were inspired to bring country music to Berlin after visiting Nashville last year.

“We thought ‘Nashville Comes to Main Street’ would be so much fun,” he said. “It just grew from there.”

Wells said the event will be the town’s first country music festival.

“There is always something fun going on in downtown Berlin,” she said, “and it gives everyone the chance to enjoy some country music.”

The music festival will feature live performances from Ruthie and the Wranglers, Arty Hill and the Long Gone Daddys, and Patsy’s Honkytonk Torch & Twang. Attendees are encouraged to dance in the street or to bring a lawn chair and listen.

“We’ve never had the Nashville and classic country sound in Berlin before,” Fager said. “It’s way different than other musical events. It’s all about the music.” 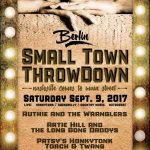 Wells said barbecue vendors, Sobo’s Wine Beerstro and the Burley Oak Brewing Company beer truck will be at the event and Gilbert’s Provisions will be serving crawfish. Downtown merchants will also have tables set up along the street.

“It’s a good reason to come downtown, listen to some music, do some shopping and have a good ole time,” she said.

Fager said he hopes the family friendly festival will generate an interest in country music and will draw new visitors to the area. The goal, he added, is to make the country music festival a yearly tradition, similar to the Fiddlers Convention and New Year’s Celebration.

“We hope to have a great turnout,” he said. “Hopefully it will follow that same path and that it becomes a hallmark.”

The festival will take place Saturday, Sept. 9, from 1-6 p.m. on Berlin’s Main Street. Admission is free.

Proceeds from the festival will benefit Main Street Berlin and beer sales will benefit the Berlin Arts and Entertainment Committee.

“This is something for all those country music lovers out there,” Wells said. “It’s your chance to come down and have a good time.”