That was the message shared with local educators as Worcester County Public Schools hosted a back-to-school kickoff Tuesday at the Ocean City Performing Arts Center. Guest speaker Baruti Kafele, a longtime New Jersey principal turned author and motivational speaker, reminded teachers just why they were so important to their students.

“Their success is tied to your success,” Kafele said.

Kafele, whose visit was sponsored by Blue Water Development, spoke to a crowd of 1,200—made up of teachers as well as support staff and school system officials—sporting black shirts with the #WeAreWorcester motto emblazoned in the colors of the Maryland flag. Kafele was quick to praise all of those who kept schools running on a daily basis. He learned firsthand how critical each employee’s role was during his 14 years as a principal.

“I cannot lead effectively, teach effectively, in a sloppy looking building,” he said. “I need for staff and children to walk into an oasis.”

He said that was particularly important when students were coming from households of poverty and were overwhelmed with struggles when they were at home. He said it was up to teachers to encourage those students. 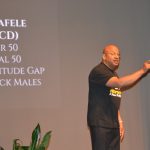 “The difference between their success and their failure is you,” he said.
Kafele also detailed his own past in an effort to illustrate the importance of attitude. He described the way he’d dropped out of school as a 13-year-old. While his mother eventually convinced him to return, it took him five years to finish high school with a 1.5 GPA. It was another five years before he’d decide to attend college and become a teacher. He said the only thing that changed during that time was his attitude.

“The power is in your attitude…,” he said. “There will be difficult days but it all boils down to that attitude about your craft.”

He encouraged teachers to be perseverant and stay passionate. He said a “nothing will stop me” attitude would change lives.

Teachers also heard from a variety of local officials Tuesday, including Jim Bunting, president of the Worcester County Commissioners, and Bill Gordy, president of the Worcester County Board of Education. Superintendent Lou Taylor, who made an entrance by dancing on stage with a handful of students, reminded those present that each and every one of them played an important role in the lives of local children.

“I challenge you to do the things above and beyond your teaching talents this year for our kids,” Taylor said. “Love them. Encourage them. Embrace them. I challenge you to take a step forward and be a game changer. Step out of your comfort zone like I stepped out of mine this morning by dancing in front of you…I did it because I want to tell you sometimes we have to take chances to make a difference.”