OCEAN CITY — Seven people were rescued from a 35-foot recreational boat fully engulfed in flames about 10 miles off the coast of Ocean City early Friday morning. 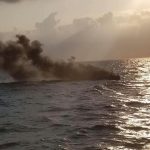 Photo courtesy of US Coast Guard

A Good Samaritan had immediately heard the distress call and urgent marine information broadcast and also responded and located one crew member from the burning boat who was spotted in the water. Eventually, all seven people who were on board the burning boat were saved and safely returned to Ocean City with no injuries reported.