OCEAN CITY – A leatherback sea turtle washed ashore in Ocean City last weekend, hours after it was first seen in the shallow areas of the water.

Tyaskin resident Jody Earp said she and her family were on the beach for the OC Air Show when they saw the sea turtle swimming close to the shore on 4th Street between 1:30 p.m. and 2 p.m.

Earp, who was in the water, said she saw a fin appear in front of her before immediately yelling out that it was a shark.

“People had gotten out of the water fast and then within moments we could see it was a turtle as he stuck his head up,” she said.

Earp said she, her husband and several people gathered around to view the sea turtle, but expressed concern that a nearby lifeguard did not clear the water.

“I just don’t understand why the lifeguard didn’t even get off his stand when he, for sure, had seen the large animal in the water,” she said, “not only to keep people safe in this very popular resort town but to keep such species safe as well.”

She added that the lifeguard continued to watch from the stand until the sea turtle went away and maintained that the turtle was alive when she and her family left the beach.

“The size and beauty of this turtle so close and alive in the water was an amazing and unforgettable experience that we and our boys will always remember,” she said. “So sad that after the turtle disappeared close to 3 p.m. … he was found deceased the same place hours later.”

Ocean City resident Darleen Baust Lis said she was at the beach between 4th Street and 5th Street around 4 p.m. when she witnessed the same leatherback sea turtle wash in and out with the waves.

Baust Lis said the lifeguard cleared the area until it was apparent the sea turtle was in distress. With the help of a few men, she added that the turtle was brought ashore.

“It did initially appear to be alive, though it may have just been the current,” she said. “There was also a crack in the shell.”

Ocean City Beach Patrol (OCBP) Capt. Butch Arbin said personnel on the scene believed the sea turtle to be deceased the entire time it was near the shore.

“It’s unusual to see it alive and then later it washes up dead,” he said.

Arbin said the OCBP’s policy is to clear the area if any hazardous material or living sea animal is in the vicinity. He said the OCBP is trained in marine animal rescue and contacts the National Aquarium when living marine animals such as seals and turtles wash ashore. 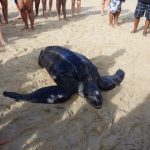 “From the time we got involved, it was dead,” he said. “If it was an alive marine animal, I never heard that at all.”

“I just know what our personnel said and they said it was deceased,” he said. “If it were alive, we would have had the National Aquarium come.”