OCEAN CITY — Less than 24 hours after a massive marsh grass wash-up on the northern half of Ocean City’s coast on Wednesday, much of it has been cleaned up, or literally raked up, and is waiting to be trucked away and disposed of.

On Wednesday, the high tide brought in a massive amount of what is best described for now as marsh grass, or likely phragmites, and deposited it on the beach from around 70th Street to the Delaware line. The marsh grass piled up on the beach along the shoreline in an area as wide as 20 to 30 feet from the high tide line in most locations and about two- to three-feet deep.

Ocean City Public Works Director Hal Adkins said a close inspection of the washed-up material led him to believe it was marsh material, perhaps, phragmites, that had been cut or harvested and washed out to see. Adkins said the vegetation was uniform in length for the most part, which suggested it had been purposely cut and allowed to wash out to sea.

“It’s more of a consistency of straw,” he said. “Each piece is practically the same length and about the diameter of a drinking straw as if somebody might have cleared a marsh and it got washed out to sea. The working assumption is it probably came from up north somewhere, but we’re not certain about that at this point.”

Maryland Coastal Bays Program Science Coordinator Roman Jesien was also contacted for his opinion on what type of vegetation the massive wash-up is and perhaps where it came from and he shared the working assumption it looks like phragmites. Phragmites is an invasive species that grow rapidly in wetlands and other marshy areas into dense stands that choke out native vegetation.

“I think the assumption is right,” he said. “I think it’s phragmites but where it came from is anybody’s guess at this point. It could have been cut or cleared from somewhere and washed out to sea and ended up on the beaches at high tide, but it would have been a large-scale clearing. I’ve never seen anything like it.”

Jesien said the vegetation was definitely not seagrass or sea algae.

“It’s definitely terrestrial in nature,” he said. “It’s unclear where it came from, but I talked to people in Delaware and it has washed up as far north as Dewey Beach. They didn’t see anything wash out of the Indian River Inlet, so it could have come from somewhere up in the Delaware Bay or even farther north. It’s kind of strange. It almost looks like a cargo ship carrying hay bales sank or dropped its cargo overboard.” 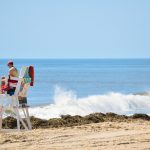 While the jury is still out on the type of vegetation and its origin, the clean-up effort was already in full swing by Thursday morning. Adkins said Public Works crews worked through the night on Wednesday and into Thursday deploying what can best be described as a large rake attachment on a tractor and dragged the vegetation back from the shoreline and stacked it neatly in big piles as far as the eye can see.

“We’re basically done,” he said early Thursday. “Our crews worked through the night essentially raking the vegetation back from the high tide line and creating many piles the length of the beach. The shoreline has been cleared and our visitors and residents can enjoy the beach and access the ocean.”

Adkins said an effort is already underway to remove the piles of vegetation from the beach. City Engineer Terry McGean reached out to the Maryland Department of Natural Resources (DNR) for assistance in the clean-up and an arrangement was made to have a private contractor ultimately remove the piles.

Through much of the winter and spring, the DNR had a subcontractor, Ashton Environmental, in Ocean City working on the dunes, dune fences and cross-overs and the company just completed the work as recently as last week. There were funds left over in the contract that weren’t spent and the DNR sending Ashton Environmental back to Ocean City to pick up the massive piles of vegetation and haul it away to an unknown location for disposal.

“Basically, the Public Works Department’s part of the clean-up effort is done,” said Adkins. “Ashton is going to show up, mobilize their equipment and pick up the piles and haul them away.”

Adkins said in his three-decades plus as public works director, he has never seen anything like the massive vegetation wash-up on Wednesday.

“In my 33 years with the town, I’ve seen and dealt with a lot of different incidents, but this is definitely a first,” he said. “I think this is a one-time thing. It looks like the current has picked up in the last 24 hours, so if there is more of this stuff out there, it will probably be somebody else’s problem.”