OCEAN CITY — On the eve of Memorial Day weekend, federal, state and local officials were on hand in Ocean City on Wednesday to launch a new “Ride Inside” public safety campaign on the dangers of bow-riding.

In the wake of several serious boating accidents in the resort last summer, including a fatal propeller strike that claimed the life of a child in August, the Maryland Department of Natural Resources (DNR) and its law enforcement arm the Natural Resources Police (NRP) and the U.S. Coast Guard have partnered on an aggressive public awareness campaign promoting boating safety and the dangers of bow-riding, or riding on the front of a vessel outside the passenger areas with one’s legs dangling over the water.

Almost immediately after the tragic fatality in Ocean City last summer when a nine-year-old boy who was riding on the bow of a rented pontoon boat fell off the front of the vessel and was swept under it and into the path of the propeller, state officials and the area’s representatives in Annapolis began exploring ways to prevent similar bow-riding accidents in the future. Currently, bow-riding falls under the larger umbrella of reckless or negligent operation, but the DNR and its Boat Act Advisory Committee along with Delegate Mary Beth Carozza and Senator Jim Mathias began exploring ways to regulate bow-riding as its own offense.

The DNR then opted to attempt to regulate the dangerous practice of bow-riding through legislation and Carozza and Mathias each filed bills in their respective chambers during the General Assembly session, but the legislation died as the session ended. Instead, the DNR, NRP and the Coast Guard opted to launch an aggressive public safety campaign on the dangers of bow-riding and the campaign was launched at the Coast Guard station in Ocean City on Wednesday.

“Bow-riding falls under negligent and reckless operation and we will be vigorously enforcing it this summer,” said NRP Superintendent Colonel Robert “Ken” Ziegler, Jr. “Riding on the side of a vessel with your feet dangling feels good on a hot summer day, but if the skipper has to swerve to avoid something or runs aground or any number of instances, you can end up in the water and in the path of the propeller.”

Ziegler used an analogy that resonated with most at the Ride Inside campaign launch on Wednesday.

“You wouldn’t let a family member ride on the hood of your car, so why would you let them ride on the bow of a boat with their feet dangling,” he said. “If a boat hits a wake or runs aground they could fall in the path of the propeller and that doesn’t end well.”

Coast Guard Lieutenant Commander Sara Wallace outlined the dangers of bow-riding and some rather grim statistics about propeller strikes.

“The Ride Inside campaign is an extremely important one,” she said. “To put it in perspective, a typical boat propeller could cause 160 cuts in one second. It could cause cuts from head to toe in less than a tenth of a second. We can’t emphasize the importance of this enough. We want boaters to have fun, but we also want them to come home at the end of the day.”

Carozza, who has been at the forefront of the issue since the tragic accident last August, said Ziegler’s analogy really brought the dangers of bow-riding home for her.

“Each one of us can do our part in this campaign,” she said. “What really hit home for me is when we heard Superintendent Ziegler say you wouldn’t put your child on the hood of the car while it was in motion, so why put a child on the bow of a boat? That’s the message we need to get out and continue to hammer home.”

Carozza did not rule out another attempt at regulating bow-riding through legislation, but said she hoped the aggressive Ride Inside campaign, including the cooperation of the DNR, NRP, Coast Guard, the marinas around the resort and the boat rental companies, would help stem the tide of serious boating accidents in the resort and across the state.

Local Ron Croker was also on hand on Wednesday wearing two hats as a long-time boat rental company owner and a representative of Mathias. Croker said his family has owned Odyssey Watersports and other rental companies for two decades and has worked closely with the NRP and the Coast Guard on improving and maintaining boating safety for his customers.

“We’ve seen a lot of things in our 20 years in this business and we can’t emphasize enough the importance of safety,” he said. “We would like to extend our gratitude to the Natural Resources Police and the Coast Guard and all of our partners in this. We work together every day and we have formed a relationship with these folks to make boating out here safe.” 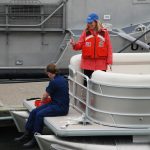 Croker then shared a letter from Mathias, who has also been at the forefront of the issue almost immediately after the tragic loss of a child last August.

“The number of tragic boating accidents continues to increase including the death of a child here in Ocean City last August,” he said. “We’re forming a team with the Natural Resources Police, the DNR, the Coast Guard and all of our partners in this to make boating safety a priority. We want to make this our safest boating summer ever.”

Jackie Cutlip, who owns and operates Bayside Boat Rentals with her husband Chad, said her company and all of the rental companies were committed to boating safety in general and bow-riding specifically.

“We pride ourselves in our employees and our attitude is always safety comes first,” she said. “Our employees go through extensive training and every day they convey to our renters the importance of safety.”

Cutlip said last August’s tragic accident hit home for her for a variety of reasons.

“We saw that tragic death of a child last summer and I’m also the mother of three young children,” she said. “Most of these things are easily preventable. Don’t put your kids on the front of a boat.”

Cutlip said the Ride Inside campaign and a heighten awareness of boating safety was a top priority for her company and all of the boat rental companies in the resort.

“Ocean City is a tourist town and the number of tourists in the summer far outweighs the number of local residents,” she said. “We are happy to provide the tourists with opportunities to make lasting memories, but only good memories. Safety is the top priority and nobody takes that more seriously than we do.”