OCEAN CITY – A two-time Emmy award nominee, producer and singer is bringing his production, “Celtic Yuletide” to the Ocean City Convention Center for one performance this Saturday, Dec. 3

Michael Londra, an Irish singer and lead voice of Riverdance on Broadway, said the Ocean City performance will be the only U.S. concert for the 2016 year.

“It is random because I usually do 30 dates in November and December,” said Londra, who added that prior engagements in Dublin prevented him from staying in the U.S. longer.

“What happened was I had a window of four days in the U.S. and that date was already booked by the convention center,” Londra said. “I literally fly out the next morning to Dublin.”

Local officials have been working with Londra’s entertainment agency to secure a date since May, according to promoter Bob Rothermel of TEAM Productions. In August, the sides confirmed the concert.

“We are certainly proud to be chosen and it worked out to have the show perform in Ocean City,” Rothermel said.

Londra, an accomplished tenor singer, said he came to the U.S. 20 years ago and decided to stay.

Since that time, he has launched a recording career and worked with Luciano Pavarotti, Andrea Bocelli and Sarah Brightman on two songs.

“I sound much more casual than these singers,” Londra said. “But Irish tenors have a certain voice that works well in that environment.”

In addition to these performances, Londra’s role as co-producer in the television production “Beyond Celtic” helped kick start his touring career, he said.

“About five years ago, a PBS special opened the market for me to tour around the nation,” Londra said. “I have access to the best river dancers around the world.”

Londra said he has spent most of the year touring Europe, but will be in Ocean City for the show’s only U.S. performance in 2016.

“It is my favorite tour, and I couldn’t miss the opportunity to do a concert,” he said. “I am a total Christmas sap. I am pathetic.”

Londra will rejoin the group again in March for his 2017 U.S. tour dates, but said it will be the last time this year they will perform together.

The performance, dubbed “Christmas from Ireland,” will host a variety of singers and dancers.

The songs and dances will highlight Celtic customs and Christmas songs and other famous international carols in Celtic tongue and style.

Musicians will accompany the performance with pipes, fiddles and drums, and Celtic fire dancers will perform traditional and modern Irish dances. 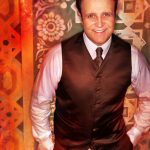 Londra will also perform his original song “Beyond the Star” and notable Christmas carols, such as “Oiche Ciuin” (Silent Night).

Rothermel said tickets are on sale for $35 and $45 at the box office inside the Convention Center on 40th Street and through Ticketmaster at 1-800-551-SEAT.

For more information on the show, visit oceancityconcerts.com. The show is set for 8 p.m.

“Tickets are doing well,” Rothermel said. “I think it will do well.”

In addition to his musical career, Londra is the creator of the Internet radio station Radiocelt and co-creator of VenuWorks Theatricals, a company that brings musical and theatrical performances to the stage.