SNOW HILL – A Christmas tradition continues albeit in a new location this week in Snow Hill.

Visitors to Friday’s annual Christmas Market in Snow Hill will have the opportunity to get a start on holiday shopping as they admire the renovations in progress at the town’s former opera house. Though the Christmas Market is typically held at the fire house, a conflict prompted organizers to move it to the old opera house — soon to be Toy Town — on North Washington Street.

The Christmas Market will run from noon to 8 p.m. Dec. 2 at 209 N. Washington St. Day said the event, though it started early in the day, was meant to coincide with Snow Hill’s monthly First Friday event. 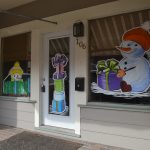 “We wanted to do something a little different to add to the First Friday in December,” he said. “It was really nice last year.”

By hosting it on a Friday, Day says the dozens of employees who work in the local court house and government building will have the opportunity to visit. The market will be made up of a wide variety of vendors who will be selling products such as locally roasted coffee, sea glass, popcorn and Christmas decorations among numerous other items.

They’ll have tables set up throughout the 9,200-square-foot space currently being renovated by Toy Town’s Richard Seaton. Seaton, who has had a shop in Berlin for several years, will be moving the antique toy business to Snow Hill in the spring. Though there’s still much to be done, Seaton has already improved the floor, the ceiling and installed new lighting. He’s also already brought in the eye-catching two cylinder bi-plane he plans to hang from the ceiling.

For Friday’s event, vendors will be set up throughout the building’s main room, surrounding the bright yellow plane.

“It will be nice in here,” Seaton said. “I think there’s going to be a lot of people.”

The market will mark the start of the Christmas season in Snow Hill, where Day says there’s more of an effort than ever to bring in holiday business. A local artist is painting shop windows — even those that are vacant — with festive winter scenes while the Snow Hill Area Chamber of Commerce will host a decorating competition for homes and businesses. Local artist Paul Volker has created three festive backdrops that will be placed throughout town in spots where visitors can pose for photos.

In addition, the popular train display at the Pocomoke River Canoe Co. opens Friday. The entire second floor of the shop has been converted to a model train display that owner Barry Laws opens to the public each December. Children and adults alike are invited to admire the more than 1,000 feet of o-gauge track that circles the room. The display will be open Saturday and Sunday afternoons in December from 1 to 4 p.m.

Other holiday events in Snow Hill include a Victorian Christmas Celebration at the Julia A. Purnell Museum on Dec. 4, beginning at 10 a.m., and a performance by the Eastern Shore Madrigal Singers at All Hallows Church at 3 p.m. that afternoon. In addition, future events include the town’s Christmas parade, which is set for Dec. 5 at 7 p.m., and judging of the decorating competition, which is set for Dec. 19. For a complete list visit www.snowhillmd.com.