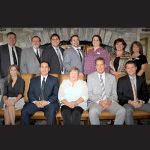 BISHOPVILLE – The Coastal Association of REALTORS® (CAR) installed its 2016-2017 Board of Directors at a special ceremony this week at Lighthouse Sound in Bishopville.

Donald Bailey, a REALTOR® for Coldwell Banker Residential in Salisbury, was installed as president of the association’s board.

“It is an honor to serve as president of the Coastal Association of REALTORS® for the upcoming year,” Bailey said. “This year, we will focus heavily on Continuing Education for our membership, while also working to raise money for my charity of choice – Habitat for Humanity.”

“We truly feel we have an exceptional Board of Directors this year and we are grateful to them for their service,” said Page Browning, Executive Vice President of CAR. “We’re looking for them to lead our association into an exciting and successful year at CAR.”

SALISBURY — A grant of nearly $600,000 to be used for the expansion of falls prevention programs was made recently to MAC Incorporated., the Area Agency on Aging, and its Maryland Living Well Center of Excellence (LWCE).

The $582,656 grant was awarded by the Administration for Community Living. Announcement was made at the 2016 Living Well Evidenced-Based Training Academy, presented by MAC and held in Annapolis.

The LWCE coordinates chronic disease self-management programs and research-based falls prevention programs statewide, teaching participants how to maximize their health in a way that improves quality of life, reduces health complications and the need for emergency care.

The 1,300-square-foot building will include a customized fiberglass enclosed reptile exhibit and outside space for zoo docents and classroom activities. The interior will provide storage and food prep space for zoo animals. The structure’s second floor will also be equipped with additional storage space.

“We are excited the Zoo has confidence in Delmarva Veteran Builders to rebuild what is an iconic structure in our community,” said Chris Eccleston of Delmarva Veteran Builders. “We are excited to be working with a team of architects from Becker Morgan who have designed the building to accommodate zoo attendance and provide an area for zoo staff to better serve the animals.”

Salisbury Zoo Director Ralph Piland said, “When people come to the zoo they want to see reptiles. The building will fulfill that expectation. And one of the best parts is that it will not cost taxpayers or the city anything.”

Salisbury Zoo Commission member Ron Alessi said, “We have worked with DVB before and found the team to be very accommodating. They offered in-kind services and did a great job on all past projects. They understand the process and what we need. They are good people and it just seemed like the right fit.” 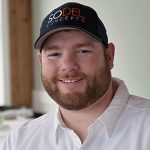 “Having the right person in this position is key to our continuing success,” Kammerer said. “SoDel Concepts is a dynamic and growing business, and it has become necessary to give more attention to our tangible assets. Our systems run at full capacity throughout the busy season, we need to be sure that no problems arise, and if and when they do, they are taken care of efficietnly and immediately. Having someone in charge of maintaining, purchasing, and general sustentation of our assets is a must.”

Levin, who was born in Wilmington, Del., earned an associate’s degree in the culinary arts from the Art Institute of Philadelphia. He began working for SoDel Concepts in 2012. Over the last four years, he has steadily worked his way up to a leadership position. He’s also worked with the teams in SoDel Concepts’ hospitality management and consulting divisions. He received a certificate in human resources from George Mason University.

“Dan is a dynamic hard working young person,” Kammerer said. “Since assuming this position, he hastaken a lot of pressure off our general managers and operation directors. He is the guy in charge now, and everyone knows if a problem arises, it will be taken care of.”

SALISBURY — Apple Discount Drugs has announced the addition of David Leach to the team of pharmacists in the Fruitland location. 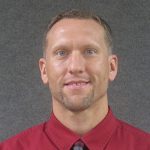 “David bring a lot of life experience to the pharmacy counter,” said Jeff Sherr, president, Apple Discount Drugs. “We value his passion for wanting to care for people’s health and well-being because that is the foundation of our business.”

Leach graduated from Eastern University in 2003 with a degree in biogenetics with a concentration in sports medicine. Soon thereafter he became an athletic trainer in the public school system in Doylestown, Pa.

In 2006, he moved to Seaford, Del. to open up a restaurant with his wife. After 10 years in the restaurant business, he decided to go back to school and graduated from the University of Maryland Eastern Shore in May of 2016. Leach was assigned to do rotations at Apple Discount Drugs and was hired upon graduation.

“I like taking care of people and making sure they get the maximum benefit to reach their health goals,” said Leach.

SALISBURY — Salisbury University is the No. 1 school for environmental studies in Maryland, according to a recent ranking by Environmental Science.org.

The site ranks SU at No. 35 nationally. Only one other Maryland campus, the University of Maryland, Baltimore County, is included.

As examples, he cited not only the department’s 2012 founding, but the creation of SU’s environmental studies major in 2004, formation of the Green Floor as SU’s second Living Learning Community in 2007, a new Environmental Studies House on campus in 2013 and the establishment of SU’s Nanticoke River Center in 2015 to support environmental education and fieldwork.

“This is a special place to study the environment,” he said.