OCEAN CITY — A Virginia woman involved in a beach melee three years ago filed suit in federal court last week against an Ocean City police officer, the department, the Town of Ocean City and Worcester County, alleging excessive force and negligence among other charges.

Last Wednesday, nearly three years to the day of the July 2013 incident, Dalima Palmer, now 27, of Dumfries, Va., filed suit in U.S. District Court against the officer who allegedly tackled her to the ground while she was nine months pregnant during a brawl on the beach, two more OCPD officers who allegedly denied her medical attention while in police custody and other officers who remained in her hospital room at PRMC while she gave birth to her child via C-section. The suit also names the chief of police, the Town of Ocean City and Worcester County for alleged negligence in the hiring and training of the officers. The suit seeks $500,000 in compensatory damages and $500,000 in punitive damages against the various defendants named in the complaint.

The incident began around 2:30 p.m. on July 21, 2013 when Ocean City police responded to the beach at North Division Street for a reported group of disorderly males. The request for assistance came from an Ocean City Beach Patrol lifeguard, who told police he had approached the group about playing soccer on the crowded beach, at which time one of the suspects allegedly threatened him.

What happened next, according to police reports and witness testimony, was a pushing and shoving match between the suspects and the police, including punches thrown, as officers attempted to detain the combatants, including Musa Seisay, 27, of Garrisonville, Md., Saidu Kargbo, 24, of Woodbridge, and Palmer, then 24, of Dumfries, Va. 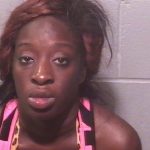 According to police reports and witness testimony, Palmer, who was nine months pregnant at the time, was involved in the fray and verbally and physically abused the arresting officers. During the struggle, Palmer was wrestled to the beach by officers and an attempt was made to handcuff her. According to the complaint, Palmer was grabbed and slammed to the beach and the arresting officer kneeled on her back as he attempted to take her into custody.

All four of the suspects were arrested and charged with various offenses. Palmer was taken to the Public Safety Building for processing when she began to experience labor pains. She was ultimately transported to PRMC in Salisbury where she gave birth to her child via C-section. Because she went into labor while in custody, her processing was halted and she was transported to the hospital. She was later charged with second-degree assault, resisting arrest, disorderly conduct and reckless endangerment.

According to the complaint filed on Wednesday, Palmer told officers, identified in the suit only as Officer Jane Doe and Officer John Doe, she was experiencing sharp pains in her stomach and requested medical attention. The suit alleges the officers denied medical attention for Palmer and only after she lost consciousness was she transported to PRMC.

According to the complaint, while Palmer was in labor at PRMC, two male officers, identified in the suit as John Does with either OCPD, the Worcester County Sheriff’s Office or the Maryland State Police, remained in her room despite her requests for privacy. The suit alleges the male officers remained in the room after Palmer requested that they leave or be replaced with female officers.

In summary, the suit names the arresting officer on the beach for his alleged excessive force while taking the pregnant Palmer into custody, the unnamed officers at the Public Safety Building who allegedly denied her immediate medical attention when she went into labor, the two male officers who remained in her room while she gave birth to her child, and the agencies who hired and trained the defendants including the OCPD, the Worcester County Sheriff’s Office and the Maryland State Police. The suit specifically alleges excessive force against the arresting officer whose actions served as the catalyst for whatever happened following the incident.

“Ms. Palmer was the victim of punishment administered in a grossly disproportionate manner to whatever her acts may have been, constituting cruel and unusual punishment and depriving her of the right to due process under the laws and Constitution of the United States,” the complaint reads. “The actions described above were unwarranted, cruel, unjustifiable and excessive.”

The complaint asserts the officer “without proper grounds, willfully, maliciously and unlawfully attacked her without cause, constituting assault and battery,” and “the injuries suffered by Ms. Palmer were inflicted as she was presenting no immediate threat to anyone.”

While it is uncertain if the nine-month pregnant Palmer presented a threat to anyone, the courts believed she was culpable to some degree. In February 2014, Palmer was found guilty in District Court in Ocean City of second-degree assault and was sentenced to 30 days in jail. She immediately appealed and her case was forwarded to Worcester County Circuit Court.

However, technical issues with her appeal related to her representation led to the appeal being dismissed and her case was sent back to District Court for reconsideration. In addition, because Palmer failed to appear to serve her original 30-day sentence, she was technically considered wanted and an escape charge was added. However, the escape charge was never prosecuted.
Back in District Court in July 2014 for reconsideration, Palmer received probation before judgment and was placed on probation of one year.

Two days after the incident, the suspects’ family and friends told a Washington, D.C. television news station the OCPD account of the incident was false and that the group was not being disruptive on the beach. The suspects’ relatives instead claimed the incident was veiled in hints of profiling and racism. The suspects’ relatives provided the TV station with a cellphone video of a portion of the incident that shows it escalate from a shouting match to a full-blown melee with Palmer in the middle of the fray. The video was shown extensively at the various trials for the defendants and will likely be a key piece of evidence in the federal suit.

The video of the incident on the beach and the pregnant Palmer being taken down on the beach went viral regionally and nationally, but from the beginning the OCPD defended the actions of its officers. At the time, OCPD spokesperson Lindsay Richard told The Dispatch “it’s very unfortunate the way the circumstances happened, but at this time we’re standing by the actions of our officers. What we’re saying is, a video shows a very small portion of a much large 360-dgree view and not all of the actions that took place are depicted in it.”