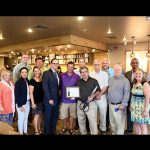 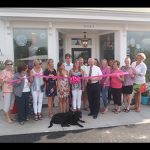 Patty Jean’s Boutique on Broad Street in Berlin celebrated its grand opening with a ribbon cutting ceremony last month. Above owner Megan Cosman is pictured with Mayor Gee Williams, Berlin Chamber of Commerce representatives and other supporters. She named the boutique after her mother, Patty Jean O’Toole. Photo by Jeanette Deskiewicz

WASHINGTON ­– Secretary of Defense Ash Carter has announced that Delmarva Veteran Builders has been named as a recipient of the 2016 Secretary of Defense Employer Support Freedom Award, the highest honor the department gives to employers for support of National Guard and Reserve employees. Fifteen employers were selected for the 2016 award.

“These 15 employers have distinguished themselves through their outstanding support of our Guard and Reserve members and their families,” said Defense Secretary Ash Carter. “Without the unfaltering support of employers like them, the men and women of the National Guard and Reserve would not be able to fulfill their vital roles in our National Security Strategy. It is a great honor for me to recognize these employers, and I congratulate them on their receipt of the Employer Support Freedom Award.”

OCEAN PINES — The Ocean Pines Office of Berkshire Hathaway HomeServices PenFed
Realty has named it top agents for the month of June.

“Our agents were busy getting properties listed and sold this month. We are starting to see properties being listed and sold in the same month when using an aggressive pricing and marketing strategy,” said Branch Manager Sharon Curtiss.

BERLIN — Linda Corrigan, coordinator of the Cancer Registry Program at the Regional Care Cancer Center in Berlin, has been installed as the president of the National Cancer Registrars Association (NCRA) at its Annual Educational Conference in Las Vegas, Nev. on April 13.

NCRA is a non-profit organization that represents more than 5,800 cancer registry professionals. Cancer registrars are data information specialists that capture a complete history, diagnosis, treatment, and health status for every cancer patient in the U.S. The data provide essential information to researchers, healthcare providers, and public health officials to better monitor and advance cancer treatments, conduct research, and improve cancer prevention and screening programs. In her role as president, Corrigan will represent the organization at regional and national meetings and support its mission to promote education, credentialing, and advocacy for cancer registry professionals.

Corrigan has a well-established career in cancer registry management and earned her Certified Tumor Registrar (CTR) credential in 1996. She is currently the Cancer Registry Program Coordinator and Lung Screening Coordinator at Regional Cancer Care Center in Berlin.

BERLIN — The number of homes sold rose in a number of areas in Maryland’s Eastern Shore region in May, according to The Long & Foster Market Minute reports. The Eastern Shore market includes Worcester, Wicomico, Dorchester, Queen Anne’s, Talbot and Caroline counties.

Inventory decreased throughout the Eastern Shore region when compared to year-ago levels, according to May data. Queen Anne’s County experienced the largest drop at 27 percent, followed by Caroline County at 18 percent. Both Wicomico and Worcester counties saw active inventory decease by 16 percent and it fell by 10 percent in Dorchester County. Talbot County saw active inventory decline by 7 percent.

Within the region, homes are selling in three to five months on average, according to May data.