WALLOPS ISLAND — A major launch program at NASA’s Wallops Island Flight Facility along the Virginia coast just south of Ocean City and Assateague appears to be back on track after a successful test of the Antares rocket engines on Tuesday.

In October 2014, NASA and its private-sector partner Orbital Sciences attempted to launch an Antares rocket carrying 5,000 pounds of cargo, including food, instruments and other supplies to the International Space Station from Wallops, but the mission was aborted seconds after liftoff in a fiery explosion on the launch pad. In the 18 months since, NASA and Orbital Sciences have been steadily putting the pieces back together in preparation for a renewed effort for Wallops’ most significant launch program.

The preparations included replacing the Antares’ aging rocket propulsion engines with new state-of-the-art engines. On Tuesday, Orbital successfully conducted a full-power test of the upgraded first-stage propulsion system for the Antares’ new RD-181 main engines. The 30-second test took place around 5:30 p.m. on Tuesday, filling the sky with billowing white smoke around the launch pad at the Wallops Flight Facility just south of the resort.

The successful test puts a planned Antares launch to the International Space Station in July back on the fast track. The Antares is the largest rocket launched from Wallops and the launch set for July should be visible to residents and visitors throughout the mid-Atlantic region and across the eastern half of the U.S. After the October 2014 accident, it appeared the Antares missions to the ISS would be delayed indefinitely or scrubbed altogether, but the success test of the new propulsion system on Tuesday signals the Antares missions are alive and well.

On Oct. 28, 2014, Orbital Sciences’ Antares rocket carrying the Cygnus spacecraft to the ISS briefly went up as planned, but the mission was aborted just seconds after liftoff when problems with the launch were detected. The Antares was purposely blown up after problems were detected with the launch and the rocket fell back to the launch pad causing a second explosion that could be seen and felt as far away as Ocean City. 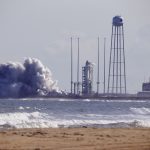 The Antares was unmanned and no casualties were reported, but the aborted mission did extensive damage to Wallops and set back an ambitious launch program from the flight facility just as it was gaining significant momentum. However, with the injection of roughly $20 million in federal funding and a ton of work from the private and public partners, Wallops, which has become a significant economic partner for Worcester and much of the lower shore, now appears to be back on track.

Orbital has a $1.9 billion contract to fly cargo to the International Space Station and the failed launch in October 2014 would have been the third in a series of nine planned for Wallops.

The Wallops Island Flight Facility supports 1,525 high-tech jobs on the Eastern Shore, many concentrated in and around the lower shore in Worcester and Somerset. More specifically, the Antares rocket launch program brings an estimated $250 million in economic development in the form of new goods, services and contracts for small businesses.